One of the more useful phrases I heard in the last couple of years was 'catastrophic success' - where things go well beyond your wildest imaginings and suddenly you have a bunch of issues you had never anticipated. For context here, my issue is that my home game has put some serious hours in and chewed through a lot more events and plot than I might have initially imagined. Now the problem is remembering all the dangling plot hooks or fizzing fuses that are scattered around the setting. 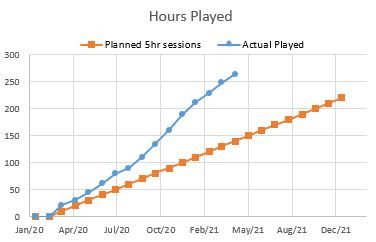 This is doubly interesting because of two aspects:
First the party is cunning and ruthless and prefers to skip sword-swinging glory in place of having the palace guard crush their problems. XP gain is lower but it surely is efficient at moving things along.
Second is that we are running an urban game - except for one brief over-night trip most of the action has taken place with them operating out of their bedrooms at the palace. Were they doing the usual slay-loot-scoot dungeon-diving then their problems would be left behind them in the dust as they carted their loot away. By staying static, consequences have time to simmer and form a delicious stew of problems.

My issue is tracking 1) all of these many things that remain relevant and 2) who among the cast of NPCs should probably be aware and/or concerned about them. My existing week-by-week process was good for tracking the knock-on consequences of players actions but not great at keeping sight of things that they had not recently interacted with. What I describe below is the set of fixes I have worked up in case you have similar problems and it might be useful to you. 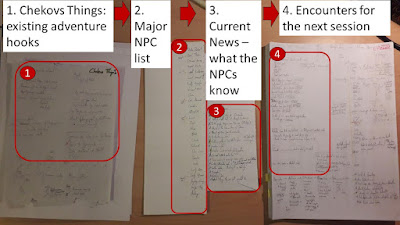 So - to solve this I have ended up with a list (literally on the back of an envelope) headed 'Chekovs Things' where I am tracking all of the big things floating about in the setting. These are effectively the un-exploded powder kegs that were falling through the cracks in my week-by-week tracking.

To compliment this list of things which are not changing (just triggered or not) is a news list which I am periodically refreshing. I do this bys running down the major cast of characters and flagging what they are focusing on at the moment. This news list changes quickly as events occur.

Altogether this means I have something that I think of as gears. The list of Chekovs Things are big, slow moving cogs that can be added to or taken away only with effort as major items are resolved.

The News List is a thing I periodically refresh that provides the interface for the party to all the big Things. These are gears turning much more quickly but driven by the slow turns of the big Things. An example might be character A has heard that a group that were sent on a task by the players is struggling with it and is scathing that they will ever get it done. This feeds back to the party that something might need their attention if they want it to happen - or that it is stalled out as they hoped and they no longer have to worry about it.

This interfaces with my session-by-session 1-pagers when I am prepping things to feed the session; the news list gives a ready feed of encounters to go into the items to happen at the table. Together with knock-on from last week and catering to players plans this gives enough to keep the sessions running along while letting me feel happy that I have not let something big fall out of sight. These are the fast moving cog-wheels that are actually the things the players interact with and therefore can move a great deal in the course of a session.

All this is very old school pen-and-paper, single sided on scrap paper because if I learned anything from dealing with loose-leaf in my first campaigns, double-siding campaign notes is the path to madness.

This could also be a quick world-building technique - make a big list of things going on in the world. Then note who knows about these things that the players are likely to interact with and then write up the list of specific encounters that give the players the chance to get at those secrets.
Posted by Xaosseed at 11:27