I set off to answer 3 questions: - how to the populations of characters running about map to what the DMG would generate - is there variation between player preferences in different (real world) geographies - are there observable changes over time This is inspired by the large datasets released from DnD Beyond - this shows us the make of the PC population for 5e, broadly speaking. Correct me if I am wrong but the last 'fractions of NPCs in the gameworld' rules that I can spot are the 3.5e DMG so we shall compare to those. 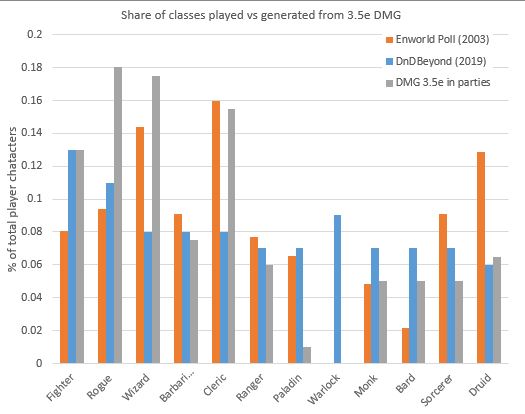 Taking the first - how does what players (blue) do compare to what the 3.5e DMG (grey) tells us is out there?

- Lumping warlock and wizard accounts for that difference between wizards in both cases (3.5e had no warlocks, both similar magic users)

- All the rogues the DMG thinks should exist are actually running monks, bards and sorcerors

Of course this compares 5e players to 3.5e DMG; I hope to check this with 3.5e data to see if it holds up.

The orange attempts an estimate from a small (N = ~50) poll in 2003 which indicates there could be a more interesting story: that not all the warlock players are wizards by another name; the theory that they are an arcane flavour of cleric e.g. drawing powers from a greater being could have something to it. More data could refute or affirm this.

Posted by Xaosseed at 13:53 No comments: