Splitting sources into Apps (Apps and reports from DnD Beyond) and Forums (surveys from Reddit, Giant in the Playground, etc) and aggregating the results weighted by number of participants lets us see the average differences between the two player populations.

Posted by Xaosseed at 12:43 No comments:

tl:dr - preferred D&D 5e player class shows distinct difference depending on whether sourced from apps/online tools or from forum response.

From digging about on the internet I pulled together a number of data sets on preferred race and class combindations of PCs over the past ~4 years (2017-2020). I wanted to see if there was a change over time but instead I found a distinct difference depending on where the data was sourced from.

First - setting everything up according to date does not show much in the way of a distinct pattern. 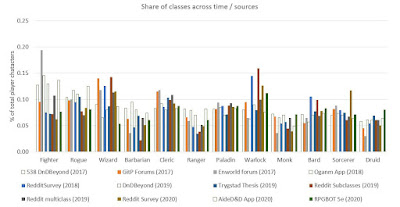 However once this is sorted by source type we see a difference between the relatively smooth curve of the online tools and apps (orange) and the forum survey responses. 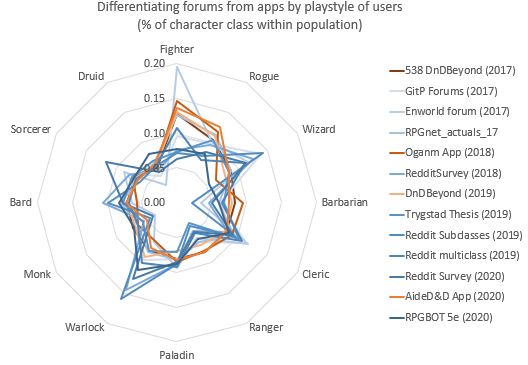 Initial hypothesis is that there is a large block of players who just want to sit down and play that tend towards melee types - "give me my sword and board and lets roll dice!" - compared to those who answer forum surveys that show more interest in spell casters both divine and arcane. 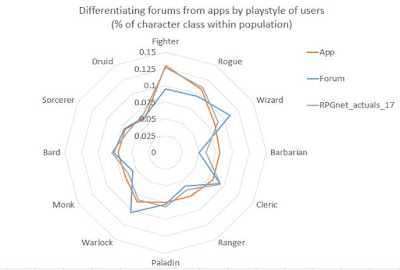 Aggregating these into a pair of archetype finger prints weighted by the number of contributors to each source highlights this difference. A single forum response deviated significantly from the forum archetype: a survey on RPG.net in 2017 requesting only those characters that responders had played for at least 1 session.

Data sources include 2 sets of raw data (OGANM app, Reddit Subclasses 2019) and 1 estimate based on sub-forum pageviews (RPGBOT) - the others are processed outputs from the creators of those sources (e.g. the report-out by a survey creator, DnDBeyond Dev webcast, etc.)

Posted by Xaosseed at 16:00 No comments: