tl;dr: home-making physical props takes time, some hints to making them useable so your time is not wasted

Maybe I just like mucking about with tea but I find distressing documents and creating tangible clues to hand to players to be one of the most fun and long-lasting additions you can make to games you run. Things, things you can hold, people like that and if it has extra things they can figure out, so much the better.

I have run a game with a big set of props and clues and played a con scenario and an outside campaign where physical things impacted the game a lot. The con scenario had a journal we could tear open to get vital papers. The campaign had the journal of one of the players from the first time they played through ~20 years earlier - a genuine adventurers journal! Here I will talk about physical documents that I used in my own game, all of which were meant to be clues or world-building of some sort.

However, my first approach to this when I started was "IC-ness matters, reality matters, everything you do to make it more real is valuable" - this was wrong. A perfect slice of the world that has no relevance to the parties activities - or worse is so oblique that they never figure out its relevance - is just a distraction and a waste of your time.

Examples; a set of correspondance that fell into PC's hands; distressed, thump-printed and crunched. And a map: The map was my favourite; I wrote it on cloth then I folded it up, stuck it in a bag and filled the bag with soot from the chimney. This I did as a GM, but here I committed the cardinal sin of making the markings on the map too obscure. Essentially, if every fact had a clue attached and a link between the facts had to be inferred, then the players got their hands on a prop for every second fact. This was not enough and my plot continued to unreel in the background while the PC's eventually gave up and fled the scene at the earliest opportunity - using the map to make their escape but essentially tossing the rest of the clues over their shoulder as they left.

My bad - I should have provided keys to the markings and unlocked the information on it with minimal effort so that use of the map was not 'trying to pry out its secrets' and more 'how do we use this information to our gain'.

Contrast with what I think was the most handled and referenced clue of the campaign: 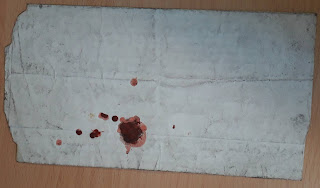 This letter was never opened, the seal still intact from a game in ~2000. Instead it was read carefully by all the party by peering in through the open side out of fear that breaking the seal would trigger some sort of magical ward. These contents were gold-star intelligence; a spies report to his employer that covered what was the incoming threat (~18 greater devils in a shock army), how dangerous it was (very), what their objectives might be (the location where the party was based) and closed with his advice on course of action (grab what you can and run).

It was useful in game and gave the players a window on what was going on and information they could act on. This one got great use.

The other dozen or so in game documents did not - because they were too vague, too oblique and were a good example of me trying to be too clever by half. At the time, I just saw they fell flat and did not quite understand why - now I recognise it was because they were great pieces for a game I wanted to play - but that was not the game my *players* were there to play. All this is long before we would even think of giving one another feedback about anything - reliving a cool moment was the height of recognition - so my way of working was just chuck mud at the wall, see what worked and do more of that.

What I did not do at the time, and should have, was turn the table around and go 'if these all fell into my hands, what would I do?' Instead I assumed that the players would somehow figure it all out and continued to scorch, soak, shred and mangle the documents in question.

This topic came up in conversations with the inestimable Comrade Kinch just recently where we noted that two major aspects of physical props - first the tactile appeal, something which is less relevant in these plague-ridden times but hopefully will be again soon, and second that they created another channel for fun to the players independent of GM interaction at the table. A group of players can be fiddling with clues to decipher them while another is talking with the GM - everyone is engaged, no one forced to wait because the GM is only one person.

Another aspect that can be handy for those of us with multiple demands on our time is that setting up good clues and props before hand lets you layer more of your brain-hours into time at the table and takes off some pressure of all the fun only flowing through the GM in the moment. The ideal case is that you can spend a happy hour or so a few nights a week setting up these props, baking in the clues and then at the table these deliver their charge of fun to the table even if you come to it frazzled.

The lessons I learned from that and would thus suggest as pointers to anyone thinking of doing similar;
First - Everyone loves a map. A map of the expected theatre of operations is sure to be a favourite thing, so much so that you could happily run a party through hoops of fire if they knew they were going to get a proper map at the end of it. However, if you don't want to define everything, then a larger scale or a schematic map would be fine.
Second - Realism is great; a set of journals and rough schematic maps I have acquired in a campaign I play in is precious because it represents what something like a dozen different parties have written down over decades and so every fact was pried from the GM and written in the blood of dead PC's.
Third - Too many red herrings will poison your campaign. A rough approximation for how many is too many is two. I will underscore this point because it is hard enough to get players expert enough in the lore enough to put the pieces together - if you then rip the rug from under them by having it all be nonsense you will have a very hard time getting them to put any more effort into piecing clues together. If you do have a red herring, make its false nature come to light fast before too much effort is poured into sand.
Fourth - Use all the possibilities: scrounge up odd sorts of paper so they feel different, distress things in different ways. Storing the map in a ziplock of soot meant anyone who handled this map of Gehenna ended up with blackened fingers and it also brought a great smell whenever it was opened.
Fifth - Be wary of noise. The dark twin of point two and the other point of failure for all these props - if you are going to spend your precious time on physical clues, then make them count. While it is realistic to hand over a sheaf of papers from a captured courier and have 10 of 12 items be nothing to do with what the party is up to, do not waste time on those irrelevant documents, make the clues obvious. I caveat this point in that filtering the noise can be done really well - Sherlock Holmes, Consulting Detective is the exemplar of the fun being fishing the truth out of a swamp of papers - but only if your table is a) down for this and b) understands there is something to find if they search. Finally whether easily found or not, reward the effort of finding the red-thread through those documents by making it meaningful.

I offer all this to try and match effort to reward - when you get it right it is fantastic to get the 'oh wow' reaction when something tangible is handed over but to make it something the party treasures it has to be a good clue, not just a physical lore dump with no relevance to their activities. Good luck!

Most Esteemed Lord Chenchille,
I write to you from the First Furnace of Gehenna, Khalas, from whence I am following and observing the path and progress of the Ba’atezu army of the Gelugon Spite. As I elaborated in previous reports, Spite has been dispatched to the front directly from Grenpoli, City of Diplomacy, and now leads the 81st Strike Group, of the First Command.
Whilst the 81st resupplied at a Fortress on Avernus en route, I infiltrated the castle and learned from lesser fiends and camp followers that the 81st is known as the Maul of Alusiel and is renowned for the glory and skulls it has accrued since its inception. The group is composed of about a dozen and a half greater Ba’atezu and has a reputation for being elite, successful and lucky; most memorably for spearheading an assault on the Stones of Draetilus and taking a mere 65% casualties.
My theory on the situation is that Spite found either great favour or disfavour in the courts of Grenpoli; if favour, then he has been given an elite force and choice targets from which to achieve glory, honour and advancement, if disfavour then it would not be out of character for the 81st to be sent into extreme peril with the expectation of achieving their objectives, perhaps someone hopes that he shall either be killed or suffer the ignominy of losing one of the Nine Hells crack regiments.
Other news and reports that reach me states that apparently another landing point has opened up along the Styx. If this is true and the Bridge at Khalas is no longer the only safe landing point on the layer then we can expect an intensification of fiendish scouting and espionage activities until the location of this new harbour is ascertained. Once it is we can expect the proverbial “all Hell” to break loose.
Given that the Maulers are now bound for Khalas and are outfitted for extended independant operations, I would urge that you liquidate and withdraw any and all assets and personnel that you currently have on that layer and to withdraw them to Sigil, as there is no telling what Spites orders are and what is to be considered a target. Any enterprise must now be considered in jeopardy, for that dozen and a half trained and equipped greater Ba’atezu will strike as the wrath of the Lords of the Nine themselves. And no mere mortals like you or I, long-lived though we may be are going to prevail before them.
Given the extreme hazards of my continuing to shadow this most dangerous of beasts, I shall expect risk-compensation for any further reports beyond this one and reserve the right to discontinue and abandon Khalas if the risks of interdiction become excessive.
I shall courier this to your house wizard as his expedition crosses the Outlands.
That you may find profit in my words,
This the 15th day of Hecatomb,
Pharaust IV of Camalon
On Khalas,
Gehenna