Returning once again to Mia Gojaks survey from the 5e Facebook group we want to look at the preferences for races by age and search if there were any patterns that could be pulled out. This will hopefully let us go deeper than previous race preference checks. Breaking out the preference of each age cohort for the various races we see some interesting trends. 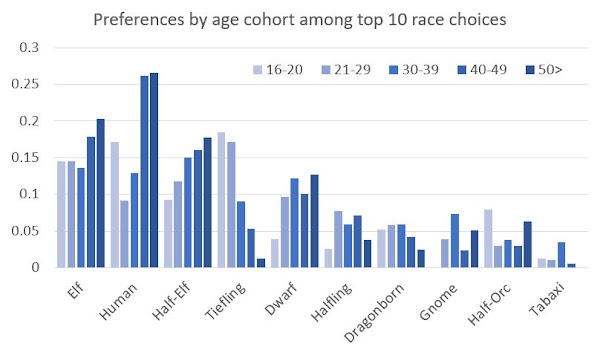 Looking at the data, I am again mostly surprised that there are any trends visible at all.

Beyond these top 10 the number of people identifying a given race as their favourite falls away to less than a dozen among the ~1040 respondents.

Prodding some friends on what their expectations would be before they say the results of this analysis gave answers broadly in line with this - it was expected that dwarves and elves would be more popular among older gamers, tieflings more popular with younger gamers.

Looking at the same top 10 races grouped by experience of the player we find a similar result.

Given that some of these races only became core playable classes with later editions, some of the popularity of tieflings and dragonborns could be explained that way. The fact that there are 30 year gamers with dragonborn as their favoured race does suggest people find new favourites with new editions. It would be interesting to map the popularity of certain races to the cultural artefacts of the years people got into gaming - for example what made gnomes popular in the '90s?

Another aspect could be the shift in acceptance of certain races in the general lore - in the original Dragonlance era a half-elf was a strange outsider but in more recent years that mantle has shifted to tieflings which may be behind the enduring popularity of elfs at the same time as the popularity of half-elves has declined.