Getting more gaming in - how long and how often

I saw a post to a group asking 'was it normal to game 6-7 hours sessions twice a week' for 12-14 hours of table time per week. Short answer - that is a lot of gaming, well over what most people seem to be getting in.

Sweeping up a bunch of surveys to try and get a sense of whether players are playing more through time it appears the answer is yes; this could be down to virtual tools enabling quality online gaming or just a wider player base allowing more people to find a table. 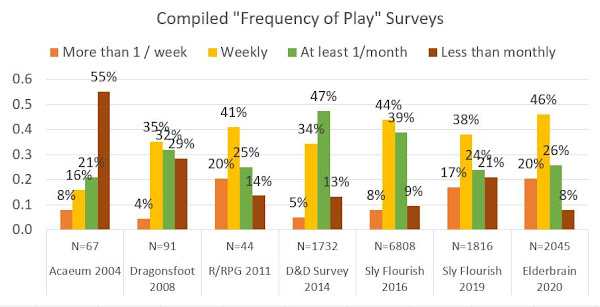 So it appears from the larger surveys (2014 onwards) that at least half of respondents are getting in that weekly game, with about 1 in 3 of those people playing again in the week.

Similarly on session length - it looks more like most people are getting in 3-5 hour sessions when they play, consistent with what an Adventurers League adventure will say on the front. 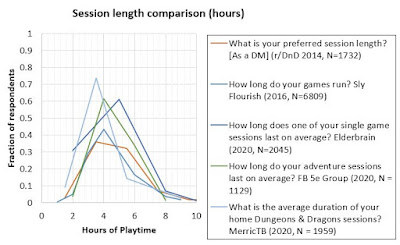 So total gaming most people will be getting in is more on the order of ~5 hours a week - 6-7 hour sessions is being done by ~ 1 in 5 of respondents. This does not appear to be changing over time.

More games and longer than average sessions puts our question-asker well above what most are getting to do. I do not have a data set with a clean 'frequency of play' and 'length of play' comparison to dig into this more deeply.

In any case I like how the 'less than monthly' bars look to be trending down in the compilation of play frequency surveys. I hope this is a sign that better online infrastructure and a larger player base in recent years is letting more people get in the games they want to.