I like lizardfolk and all their many scaly-kin cousins. Given the explosion of variety we know happened in our own world back before the unpleasantness with the asteroid I think it is reasonable to say that injecting magic and dragons into the pot with basic lizardfolk should yield a lot more interesting things than 'lives in a swamp, focused on survival'. 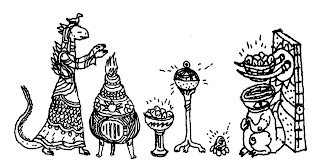 Lizardfolk by their hearth by Evlyn Moreau


So what are the aspects of our lizardfolk culture?

First deep time:
1. The lizards live for ages, they have been here since forever, and see themselves as heirs to the crocodiles, first inhabitants of the world.
2. Today their culture is old, proud, hide bound, jaded and decadent. You cannot tell them anything they have not seen before. Novelty is a precious thing.
3. These lizardfolk see themselves as the descendents of the dinosaurs and continuation of a million year culture. So much history has passed that they have forgotten it. Too vast for any individual to comprehend, everything about the past is boiled down to heuristics and rules of thumb.
4. Some groups of lizardfolk will just be care-takers, surviving to bridge a hundred-thousand year gap until the stars align, the vaults open, the emperors return to rule once more.
5. There are groups out there that live by 'we have been around for ever, we had high culture, we got bored and dropped it.'
6. Day to day their behaviour patterns are echoes of some very, very old etiquette that has been sanded down over aeons of time - you lean down to greet someone because typically a lizard-of-standing should have come riding a dinosaur way back in the day.

Second natural mastery:
1. Lizardfolk have been around enough that they adapted their environment to self-sustain in the way they want it. Garden forests is the subtle version, guardian beasts is the loud version.
2. This is different from elves in the sense they may dwell in the wilderness but they do not work wood or smelt metal - they use the things they harvest from entities they have bred to grow in certain ways.
3. All necessities of life can be harvested from certain things in their environment.
4. Note a lizardfolks environmental tolerance are not a humans. They could cheerfully keep long submerged passages in their homes for heat management.
5. Lizardfolks scaly hide also make their tolerance to insects different - bee hives can be kept in every house, even wasps or other pollinators might be maintained both to keep away pests and enhane their gardens.
6. Signs that an outsider could take for ruination - the forests grown back over an ancient city - could just be the lizards adapting to a new era of technologies; they mastered nature and shifted to that as their primary habitat without bothering to move location.

Third heat: Back in Spelljammer there was a great hook where the lizardfolk had figured out that the warmer their eggs were incubated, the smarter they hatched. The next step in Spelljammer was 'so therefore there will often be lizardfolk incubator ships in near-sun orbit' which is an answer but let us go further with this. First off, we now have a hard hook to hang a solar cult off because those who heed the sun are visibly superior to those who are not.

But the sun is not the only source of heat; some other suggestions to play with could be:
1. Solar focused - concentrator mirrors and other direct solar capture as mentioned
2. Greenhouse style hot atmospheres - high humidity, heat accumulator type locations
3. Hot springs and other geothermal sources (hot but generally survivable)
4. Lava flows and other direct volcanic heat sources (deadly heat)
5. Elemental connections to the plane of fire - including fire genasi-lizardfolk
6. Outer-planar connections - ranging from gates to the unending sun of Nirvana to the hotter hells; includes aasimar- and tief-lizardfolk
7. Solar-orbit ships - as per classic Spelljammer
8. Planetary-gates - getting to planets closer to the sun by portals between worlds, not flying across the void

Any of these could be a heat-seeking theme to hang your lizardfolks culture and drive on or you could pick a handful of them to get a bunch of factions competing over the 'one true way' to properly warm the egg creches.

I think together the themes all point towards a patient society that tinkers with itself and its surrounds over generations that to me speaks to a culture of building out of stone to not have to bother doing it again or living in simple huts because 'all things are transient'. To the lizardfolk this is one coherent culture but outsiders may not recognise all these sub-groups as the same.
Posted by Xaosseed at 02:44