tl;dr: second in the series on using side events in 4X and other games for inspiration at your table

A second in a series about drawing inspiration from 4x games. We return to Fall From Heaven II but this more as a series of events that gives a great emergent high magic disaster.

Once there was a land with a prophecy of doom - four horsemen would come, one after the other, and in their wake the world would be destroyed. First would be Stephanos, who bore a Crown that would seduce those who stood against them to serve him. Second would be Buboes, whos great Sword of War would hasten the apocalypse with every soul it slew. Third would be Yersina bore a plagued sword and would slay cities with their tread. Fourth would be Ars Moriendi who would enslave the souls of those they slew as wraiths to spread further destruction. 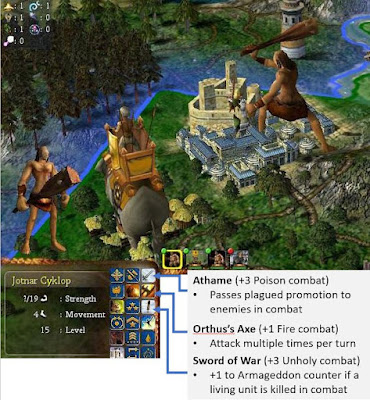 In this land there was a great warrior, a mighty giant, who had risen to glory fighting the beasts and raiders of the wilderness. When first Stephanos came to the land this champion faced and slew them with the fiery Axe of Orthus. Later Buboes appeared far away on the far end of the continent from the giants home. Buboes roamed freely, slaying all who faced them, across realms of mages and elves. All who faced them died and hastened the coming of the next troubles.

With so many dead to Buboes sword, Yersina appeared. The giant strode out to face this threat, destroying them and taking their poisoned blade. Thus armed and fearing the disasters that would follow in the wake of the fourth horseman the giant set off across the continent to face Buboes.

The elves refused access to their lands, despite the long quiet relations between the giants and the elves. Buboes roamed and slew and so the giant broke the frontiers, traversed the elf lands and slew Buboes. As the giant took the Sword of War to hide it, the elves attacked the invader. Fighting for their life, the giant defended themselves. The sword of war was wielded in defence and the elves fall to it like wheat to the scythe. The sword drank deeply; it cared not who holds the hilt.

The attack fails, the giant stands victorious. The elves swear vengeance after this disaster and the giant and his retinue have to try a fighting retreat out of the elf realms to get the sword of war to safety.

The plan to save bloodshed and rescue the elves from this scourge was an utter disaster. The giant won free of the elves attack just in time to race back across the continent to face the newly arrived Ars Moriendi.

Here we see best laid plans going horribly wrong and how two nominally 'good' factions could bring about the apocalypse. Lots of scope for adventurers to get involved from the high-power 'kill Buboes, hide the sword' to negotiating access for the giant to do it. Similarly, these kind of events give great background stories to be happening off camera in your campaign - why do you the adventurers have to deal with the dragon - where is everyone else? They are on the far side of the kingdom dealing with this mess...

Other small tales to make a full d8:
2. The Anvil Fortress - the desperately manned barrier against the ravening hordes beyond. Generations of warriors sent to this forbidding place, worn down, eventually to run out of luck and die. The forested hills below the fortress grow almost as many rusted swords as trees now. There is coin to be had for mercenaries or salvage for the reckless.
3. The Dwarven River of Gold. Fabled across the lands, this is not the molten metal stream that everyone thinks but a tightly tethered flow of water surrounded by water-driven workshops, making weapons, milling grain, weaving cloth. The dwarves guard it so fiercely because it is the heart of their realm. Many would pay dearly for the secrets of the River and the Dwarves will kill to keep them.
4. The high plateau of the airship folk. An enormous city of a strange artificers who ignore the lowlands and dwell only on inaccessible peaks. Most of the world sees them only as great airships pass overhead with expeditions of strange technologies and machine-folk arriving to fight dragons and steal their hoard. It is said that if you can attract their attention, they may help you in your desperate need.
5. The Arrows of the Oak Queen: the name given to the long-range scouts of the Elves; their forest lands are far to the south but they roam far across the continent, interfering in the plans of those they deem a problem. In particular they act to bait their foes to fight amongst themselves. If you stand against the elves, you may find swift arrows or raging creatures landing in your camps.
6. The great quest for the mithril mines. It is said the secrets of working the star-metal mithril have been discovered and now a realm far over the sea is in a frenzy for they have no mines. The rumours speak of a great invasion force, of plans for a port on a wild continent where a dragon rules with an army lead by a mighty warlord. There is talk of good coin for brave souls and treasures beyond reckoning.
7. Scorpionland - across the ocean there is an place where invaders bleed as they try to conquer the continent. The seas before the continent are infested with great sea serpents. The resident goblins and orcs defend their realm, harrassing those who dare trespass into their forests. There is always work for the willing, because rooms in the ramshackle ports are frequently freed up as their old occupants perish in the forests.
8. The Tomb Line. Across the continent there is a line of settlements of local tribes, fortifications and a great coastal port where a dragon reigns. The dragonsmen have run roads deep inland and disturbed an ancient tomb. Now a dread liche roams between these places, sparing those who live there but bringing a horde of spectres down on all who stray within his sight. The worse part - the dread liche can see further than most. More on this tale can be found here.
Posted by Xaosseed at 10:10