The latest update released from WotC had a bunch of interesting data so I threw it together with the 2020 data to see what we see. Short answer - another clear sign of this big pulse of players joining in their 20s.

Comparing the WotC player age breakdowns from 2021 to 2020 there is a change towards a younger population group in general. The under 24 player population has increased to over 1/3 of the total population. 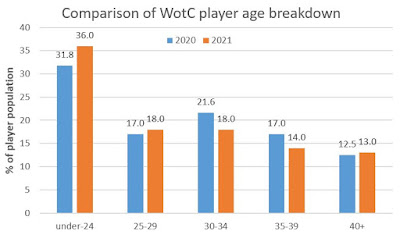 Unfortunately the breakdown of the under-24s has changed between surveys - with the lower 2 years clipped off for the 2021 survey. What is very interesting is that the upper part of the under 24 group became narrower in 2021 but still grew to contain a larger share of the population. 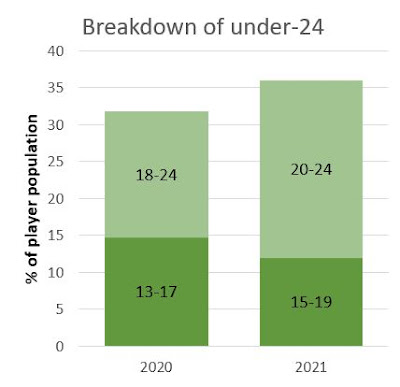 Similarly, looking at the 60% male/40% female breakdown compared to trends over time, this seems to be a continuation of trends we have identified. 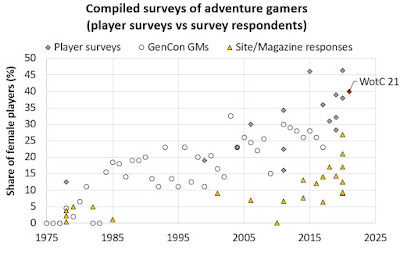 It looks like the face of the game continues to change; with new players continuing to join the game in their 20s. I would assume that most 30+ folk who most probably joined as a teen and stuck with the hobby this long are not leaving in big blocks - those 3% drops in 30-somethings are relative because so many more folk have joined in their 20s.

I would love to know the outcomes from the recent survey asking whether people thought D&D and specifically 5e were on the way up, holding ground or fading, because I would read this as a resounding sign of energy. I find the clipping away of the low teens a bit puzzling - if there is noone in that bottom range, what difference would it make?

All in all, nothing terribly shocking here, mostly interesting in that it shows continued momentum rather than a fade off - the beast continues to thunder forward. I hope that this large population of players for whom the 90s greats like Planescape are whispered legends prompts some new setting offerings for us today.

I pulled this apart before, references can be found at the base of these posts on demographic change and age.
Posted by Xaosseed at 01:52