Cometh the elders: confirming the 'age up' of new joiners

Originally prompted by pulling apart the D&D Gateway survey data from Necropraxis that showed the age of new joiners had jumped +5 years since 2015. Note post-2010 split out into before/after 2015 to emphasize trend.

Could this be seen in other surveys? Short answer yes.

Three further examples I checked showed the same shift towards post-teen joiners in recent years:
- in a 2014 Reddit D&D survey
- in a 2013-2017 replica of a 1985 Dragon Magazine survey by Random Wizard on Kirith.com
- in the change in age of member of the D&D 5e Facebook group between 2017 and 2020 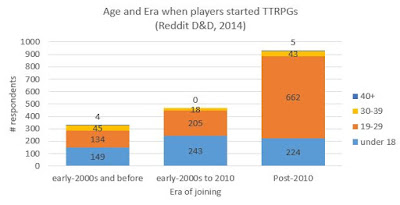 Looking at respondents to Random Wizards replication of the 1985 Dragon Magazine Survey we see a similar pattern; before 2010 most people joined as teenages, after 2010 it becomes a more mixed story and since 2015 the majority of new joiners are post-teen. 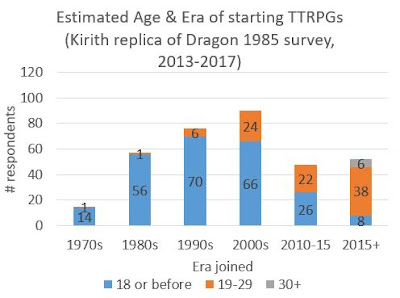 Looking at the age profiles of the members of the D&D 5e Facebook group we see something coherent with this. There is no information on when people came to the hobby but we can say that over the past 4 years the age of members of the group has shifted significantly older. Perhaps people have joined, others have left, perhaps everyone present in 2017 is still there but whichever is true, the average age of people present has risen and the age group with the largest increase is 25-34. 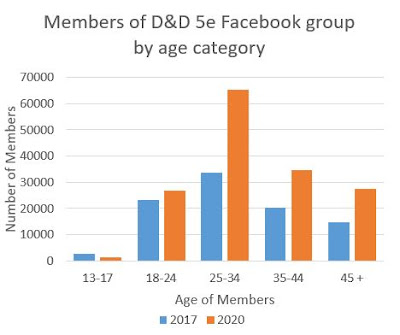 This is unlikely to shock anyone who has been paying attention but it does underscore what a significant shift the hobby has undergone in the past 5 years. Many new folk have joined and at a different age-of-joining than had been true historically.

Facebook 5e group - some posts by the mods listed the membership numbers.