Once were Wizards: class preferences by age

Returning once again to Mia Gojaks survey from the 5e Facebook group we want to see if there were any patterns that could be pulled out of the class preference vs age data. This will hopefully let us go deeper than previous class preference checks. Breaking out the preference of each age cohort for the various classes we see some interesting trends.

To see if this reflects what was seen else where I compared back to the trends over time for other surveys - this latest work is in red. 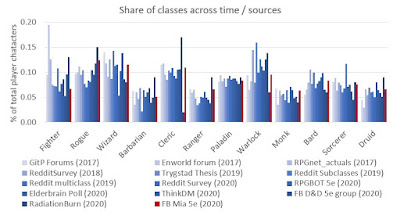 It certainly seems within the ranges seen on other recent surveys. Further checking against the forum/app archetypes for enthusiasts and generalists we see that it does probably reflect enthusiasts. 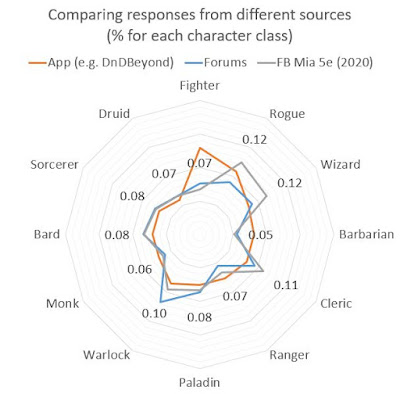 Knowing from previous checks that the 5e Facebook group has a slightly older age profile, it seems coherent that rogue and wizards are higher than most forum responses and warlocks are a little lower. The rest of the pattern tracks what would be expected for enthusiasts - seeing more preference for spell-casters and less for fighters/rogues that is seen in App data of the general population of players.

Taking these as a tentative validation that this survey is not a wild outlier, does it seem plausible that there would be these strong age preferences for character class? I can see some of this being driven by what classes were within the edition someone started playing - there have always been wizards but warlocks are new, for instance. I could speculate that these rangers are people who grew up with Lord of the Rings and Aragorn but... we all grew up with Lord of the Rings? The rogues could be Fafhrd and the Gray Mouser?

I think the lack of a younger-player preference spike apart from Warlock is pointing to preferences spreading out over a broader selection of classes rather than a huge shift in preferences. Does this mean that older players are quite sticky, finding their preference and not moving on from that as new options come available? An alternative is that these favourite wizards are veterns of the 3.5e Quadratic Wizard era and carry fond memories of tying reality in knots. All this is rampant speculation, take with the full shaker of salt and feel free to add your own thoughts below. Sources:

Following up on a previous request - the key data in table form: