tl;dr: tap the stories that rise out of 4X and other games for inspiration at your table

I played a lot of Fall From Heaven II a Civilization IV mod and some of the strange chance outcomes that dropped out of that inspired fantastic pieces of table gaming. Units become NPCs, circumstances become adventures, strange sites become dungeons. This is one such example of repeated unlikely chance that built a tiny legend. 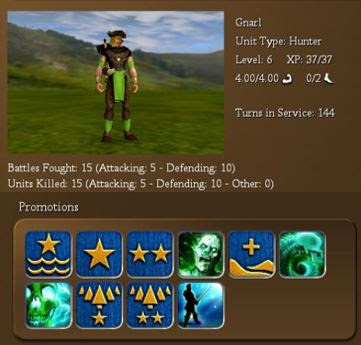 Gnarl - as he was to become known - started as a basic Hunter, a scout type that gives him better odds of having a favourable outcome when a) going into villages and b) venturing into dungeons and lairs. Villages are mostly dull but Gnarl, early on, ventured into a lair and was mutated to give him the Adventurer promotion. This made him a lot better (25%) at getting good results in lairs and dungeons so whenever we found something, Gnarl got the call.

Unfortunately, over time, Gnarl also picked up the diseased promotion that made him slow to heal, so he did little else between lairs and was weakened (-30% to Strength). We would run Gnarl in with an escort, then all the bruisers and knights who had got him that far would stand around the dungeon entrance while this sick hunter ventured into the depths to sort it all out. He always succeeded.

Things got worse, in one particular lair, when he picked up the plague, doubling the impact on his condition - (-60% to strength, even slower to heal). Now Gnarl more or less could not heal. At this point he had picked up his other blue promotions; in woods he was scary, on hills and anywhere near rivers too. But all these hard earned experience was just keeping him ahead of dying of his afflictions. As time went on, we needed to cycle him back to a fully equipped infirmary in the nearest city just to have a hope of patching him up. It never cured him, just got him healthy enough to venture out for the next job.

Each time, some new tomb was uncovered or some monster beaten back into its lair, when someone was needed to venture into the darkness and deal with it, Gnarl was the one. His terrible afflictions meant he needed constant guard against attackers until he got to the place he was needed where once again he would go where others could not, survive things that would have killed a lesser man, and live, barely, to tell this tale.

Overall - I hope this shows and example of how memorable NPCs, legends and other fodder for your table can be pulled from other sources. Practically, there are a great set of games out there where units XP up - Fall From Heaven II, Age of Wonders III and Endless Legend being 3 that spring to mind. The main line characters tend to have their arcs scripted out as part of the game - great for what it is - but the tales of the side characters, the unlikely survivors and even the heroic defeats are great fodder for your games. If you need legends to be told around the table in your tavern in a hurry, reskin those impressive moments from your own games and use those - the feeling will be right for the moment.
Posted by Xaosseed at 20:31