tl:dr; comparing surveys, it seems the average age of new gamers has shifted from mid-teens to college age over 2010-2015.

Sparking off this twitter survey of when people started playing TTRPGs and seeing the most common age is post-teen I dug into old datasets to see when this had happened. Old surveys from Dragon and White Dwarf in the 80s put the average age of TTRPG gamers at ~16 years old. Something huge changed, but when? Looking at the OSR Gateway survey from 2019* we can find some answers. 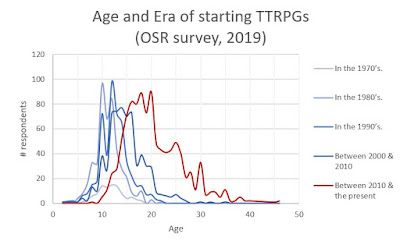 Short answer - 70s-90s the new-joiners to the scene were early teenagers. In the early 2000s it drifted up to mid-teens but since 2010 there has been a step-change shift to today where most people joining are over 20.

Lumping these profiles into buckets to match what is usually used in surveys we can clearly see the pre- and post-teenage switch happening over 2010. 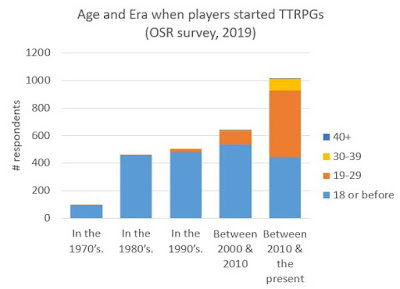 
Comparing this to old surveys on gaming forums we can verify that the pattern seen in the OSR 2016 survey is not anomalous. Splitting the OSR data into pre- and post-2010 joiners it matches well to surveys from other sources. Beyond the internet, surveys by White Dwarf in the 80s found an average age of ~16 in gamers, with "almost half" in the 14-16 bracket. Dragon Magazine #62 from 1981 also found its readership to be 16.5 years old on average, with just over 2 years experience gaming giving a ~14 year old starting age. The large Wizards of the Coast household survey in 2000 found an average age of 19, with most people (64%) having learned the game before age 15. These support that fact that pre-2010 people joined in their teen years and now post 2010 there is a surge of people joining in their 20s. 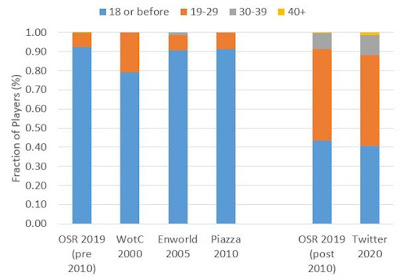 Grouping respondents by age when they started gaming.

From these comparison matches we may assume the OSR 2016 dataset is broadly representative. Therefore can we dig into finer detail? Refining into pre/post 2015 (and the launch of 5e) and also splitting the 19-29 block into pre/post 24 for 'college age' and post-college we see that since 2015 it is early 20-somethings who make up the majority of new joiners to the game, a huge shift from pre-2000 era. 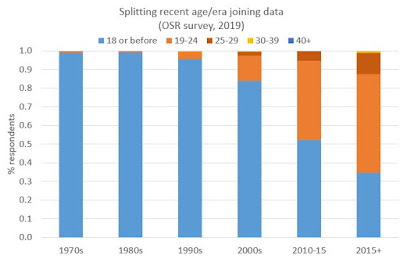 Splitting groups and displaying as fraction of that time period.


Taken together this points toward a significant shift in who is coming to the game in recent years, with change accelerating since 2015. In 2000-2010 it was still 80% of people joining as a teenager. Since 2015 70% who join are adults. How come this huge switch has happened? I knew there had been a massive influx of new people since 2015 so I expected a change, certainly, but so fast and so far? I was surprised to see these results. It turned out my instinct of 'that cannot be right' in reaction to the original twitter survey was calibrated to my era (90s) but it does not hold true today.

To put this in perspective, I'm a 90s gamer, started with AD&D in my mid teens. When I hit Uni, I got drafted into the games soc by someone from my home campaign who had gone on a year ahead of me. Most folk there knew the games already, we just organised new tables to play strange new campaigns. However now, my home campaign includes three people who have come to the game in their late 20s. One was initially drafted by their spouse. One was tagged by a work colleague. The last had heard of gaming before getting drafted into their first game at a professional qualification seminar. So my home game in the 90s was perfectly reflective of the time (all teen starts). My home game now, in the post 2015's, reflects the current epoch - 25% of the table (me) started as a teen, the rest started in their 20's. I must assume this is coincidence. Can it be that all us old gamers have gone off into the wilderness and seeded new tables?

*thinks of his buddy, teen start, who in recently years got his entire amateur dramatics society into gaming*

Nah, another coincidence. Got to be.

Have we all just been coopting our partners and co-workers? Really?

Looking to the media to explain this we find some articles that miss the point - "Forty Percent of Dungeons & Dragons Players Are 25 or Younger" is not the takeaway; D&D is not having a youth moment, the 'new start' window is aging rapidly.

Multiple sources suggest that the rise of streaming games in the wake of geek cultures move to mainstream, of being able to watch people play and understand how it works before jumping in and of being able to see more representative tables has broadened the appeal of the game - as per design intention. The change in marketing from 'a game to play' to 'a reason to spend face-to-face time with friends' appears to have worked.

It would be great to find some numbers to get a sense of what peoples paths into the game are - see a stream and form a table? How many people get bitten by that original bug and how many get their initial start from another persons enthusiasm?