tl;dr - a packed box of all you need to run Lankhmar in the gritty DCC feeling - lots to like if you are doing anything with cities.

A friend got me Dungeon Crawl Classics Lankhmar for Christmas and it dropped onto my doormat like an iron ingot. This is a packed box, full of goodness and after going through it all you both have an authentic Lankhmar sword-and-sorcery box but also a great toolkit for urban play of any style. I got a jolt to write my thoughts up because DCC Lankhmar is on Bundle of Holding right now. 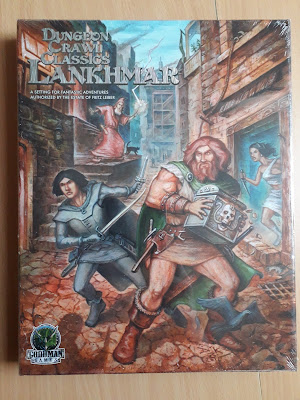 Unpacking the box began to feel like some kind of magic trick as I pulled more and more stuff out of this box that did not seem very large initially. There are maps! Posters to advertise your game! Setting books! Player handbooks! A Judges screen! A sign-up sheet! A starter adventure! All in nice quality stock, it feels positively luxurious as you spread it all out. 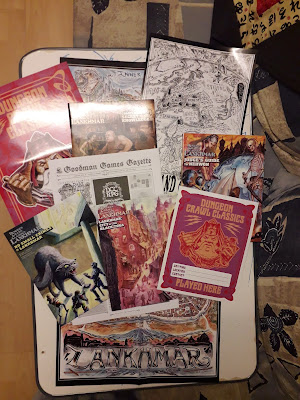 So what is all this stuff you get in the box?
First a compendium of secret knowledge - 40 pages of character creation, magic, combat, healing, luck rules and items.
Then a Lankhmar city book of 44 pages.
Next a setting book for the world of Nehwon at 104 pages.
Finally our starter adventure - 12 pages of No Small Crimes in Lankmar.
Maps - A3 of the world and half again as big for the city itself.
A judges screen with useful references inside.
A sign up sheet for your game at the Friendly Local Game Store.
Similarly a poster for DCC.
A copy of the DCC Gazette from early 2019.

So what is in the books?

The adventure, No Small Crimes is a great intro, a proper 0-level funnel such as DCC is famed for. It really puts the high hazard style of DCC into perspective with a size-shifted crawl through an abandoned house. Lots of illustration in the old school desperate adventurers style sets the tone of thieves and glory-seekers.

The citybook is the meat of what I liked about the box. Here we have a grim and gritty setting in keeping with the sword and sorcery roots of the setting from the Fahfrd and the Grey Mouser books. The tone is well set with notes like "the sea of outstretched hands" that drain the partys gold and drive them back to adventure. Detail like the lighting and smells for each of the districts is well done and provide a great toolkit for any fantasy city that you need detail for. District by district we get descriptions of the locals, interesting events that can happen and often the major dwellers that can be encountered - for fair or for ill. At the back of the book is a rogues gallery of NPCs that can be used and a neighbourhood builder to provide a base of operations for a party in an urban campaign. This helps you create layout, a base, the streets, residents secrets and adventure seeds for the starting location that will hopefully ground the party and give them fodder for adventures to start with.

The Guide to Nehwon is as it says on the cover, with half the book split equally between the geography of the world, how magic works, how to run urban campaigns and Nehwonese monsters. The other half of the book is devoted to agents and patrons - the gods of Nehwon and those who do their bidding. I found the 'how to run urban campaigns' the most interesting part with great systems for carousing, laying low after crimes and setting up campaigns that start from a 'meet' not the survivors of a funnel. There is a lot of distilled wisdom for running cities here - things like how resource management in cities revolves around time compared to say food in the wilderness or torches in the dungeon.

The compendium is the rules crunch - providing Nehwonese backgrounds, Magic in the DCC style with its corruption risks and how to adjust the highly lethal DCC combat system to the slightly more heroic style of Lankhmar with adjusted healing rules and the addition of fleeting luck. Fleeting luck is an interesting thing, building a real push-your-luck dynamic into the game as luck chips in your hand can turn the tide but a critical fail can flush all the luck from the table - so use them or lose them.

All in all, tons here, everything you need to get stuck in adventuring in Lankhmar and plenty to like if you are doing any city campaigns at all. The flavour is a long throw from Waterdeep, life is cheaper and the streets are meaner, but then this is DCC and you probably knew that already. I liked it enough that I went and backed the DCC Lankhmar Bundle of Holding for more.

If you want another take - find reviews by They Might Be Gazebos! or Matthew J. Constantine.
Posted by Xaosseed at 00:53