tl;dr: more great zines from A Thousand Thousand Islands - grab them while you can!

The postal block caused by the plague has been lifted and I have finally gotten my hands on the new zines! Most of them, that is. I grabbed all I could - two were unavailable due to further mishaps in the global supply chain that hopefully will sort themselves out soon. I was sorely tempted to get the 'everything' bundle because it contains those 2 zines but I resisted. Fow now. 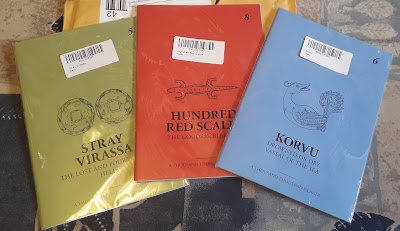 Book 5 - "Stray Virassa" - the lost and fourteenth hell. An island full of sorcerers and shipwrecked souls. Once more we set sail - "maybe four days, on fair winds" - to this strange land with a now-you-see-it, now-you-don't spectral city overlaying a moth-eaten fishing village. Here the hand-in-glove creativity of the writer and artist team shines through as a pair of double-spread pages show the sun-light revealed village followed by the cloud-covered spectral city as a sort of flick-book type that perfectly captures the 'is it there or not' uncertainty of this place of ghosts. I love that the buildings are banished by sunlight but can exist under cloud-cover - that you could climb five stories up to visit a ghost sorcerer and come to an unceremonious end as a parted cloud and errant sunbeam dissolves the building while you are up there.

This place is a spooky island of wizards and ghosts, the fourteenth hell where those lost at sea end up and where a community has evolved from those who wash up here. Half ghosts and pirates who raid by capsizing their boats dwell here and there is a great pull-out that is a dice-drop table to find out what memories the ghosts have.

Book 6 - "Korvu" - drowned or dry, vassal of the sea. A maritime nation of teak knights and living ships. A sea power - a great source for strange pirates with the prow-headed knights and their wedded galleys. There are many fantastic details in drowned Korvu - fish-sauce spirits, salt gods, boat spirits - and this zine richly rewards faith to take confusing references at face value and that all will be revealed. The palace court with its royal barge and prow-headed consort are a magnificent capstone to this fantastic place.

Two versions of this land are presented - for when it is beneath the waves and when the waters have receded. Coming upon the 'dry' version would be a good surprise for a sea-going party - a miniature version of stumbling upon the edge of the world; a hole in the ocean with a nation about their business on the revealed sea-floor.

Book 8 - "Hundred Red Scales" - the goddess, bleeding. An archipelago of silent lizards and lurid textiles. A place of commerce and wealth, with great potential to draw travellers in as a safe port of call or be driven there by roaming pirates, there is intrigue and conspiracy aplenty to keep people busy. Multiple parties are not what they seem - whether through disguise hexes, self-appointed covert missions or their own mutable natures that lead to them regularly shedding their own skin and becoming another. This place could serve as another base of operations for a party for a while - I could see the monitor-folk growing on a wandering party and them deciding to drop anchor for a while - which would give ample time for the observation of odder things and the gradual unpicking of conspiracies.

Of all of the zines, Hundred Red Scales seems to me as the place that would most reward taking time to linger - a sea-going encounter with the knights of Korvu or washing up at Stray Virassa for just a day would be memorable - the shape-shifting nature of some of the strange things of Hundred Red Scales need a little more time to reveal themselves. I would suggest to use this as a focus - with an initial start, noting the locals - off to Stray Virassa - return, see the locals again, some first points of comparison - away to Korvu and back - and now with a third look at what is here, certain mysteries begin to reveal themselves.

Overall these are great to have - exactly what I want in zines which is to stir inspiration and give me more than I could have come up with myself. With these zines that bar is cruised over at high altitude which is great. These fascinating island settings could be their own campaign setting or readily deployed as the ends of planar gates or new spheres for spelljammers to reach. The great challenge, particularly with players who know you well, is to break out of their expectations and surprise them. These zines give a deep well to draw on that should keep your tables delighted for a good long while.

Happily, in the time it took me to write this review, it appears the logistics have sorted themselves out and zine #7 and drawings #2 should be on their way.

You can find other views on these zines here by Questing Beast.
Posted by Xaosseed at 01:42