On DMs and Players as two communities

Enjoyed it? Good. I commented there that I think we do indeed see the two communities split in the responses to preferred classes on surveys of forums compared to character building apps. Table form at the bottom of the post. 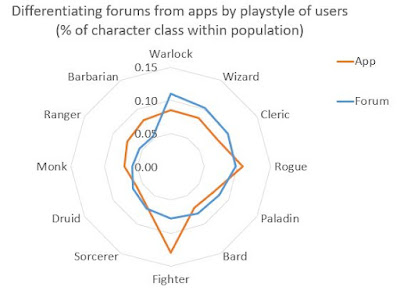 My own experiences only sort of matches that - of my gaming group when I was starting out almost 30 years ago we had DM's who were DM's in different systems. Where it was a single core book - WHFRP - a few of us might have had that. But otherwise there was the guy who was the WoD enthusiast, the other guy who was into Shadowrun, I was into AD&D at the time - so we both had a DM/player split in any given system but also everyone was a DM - all the players in any given system had an appreciation of the work to be DM.

I wonder was this way of gaming, coming from the Irish scene, just before the internet, very distant from the typical D&D (Midwest American) experience. My own experiences were different - we spun up games without having been shown how it works. The only info we got being Dragon Magazine, White Dwarf and very rarely actual products snaffled during trips to the big city. Everything I got before I hit college was either a gift, mail order or picked up on holiday. I guessed the shape these games should be from Fighting Fantasy and Choose Your Own Adventure books, salted it with Monstrous Compendium and the artwork from Dragon and White Dwarf and off we went.

I imagine there were horrible rules errors and all sorts of weird local interpretations and misunderstandings because we were our own little evolutionary island. At the same time the local Magic the Gathering tables were operating some very odd decks based on the six-person all-against-all tables we used to run. Absolutely sub-optimal for any tournament environment but worked well in the little hot-house niche we were in at the time.

Coming back to our point at the top, almost every table I ran had a good portion of fellow-DM's even if they usually ran other systems. I think that combined with the sheer logistical effort of getting to games made people value the time, certainly I sat a lot of tables that ran for a while and were good times. Those tables that fizzled almost all died before the first session or because of a major life event like players moving, not because there were players not invested.

None of this is to say "if you want a better table, bring in more DM's" - I suspect 'veteran players' also have the same appreciation that you get back what you put in to the table. I doubt anyone who is reading this needs to be told that, if you read past a graph with the differences in class preferences of different player groups, I very much doubt you sit to a table and throw peanuts at your DM. I think clarity on the game you are playing is all you need - a player that lives and dies in a blaze of glory over a single session is a memorable good time - see convention games that are spoken of in fond memory years after that one character had their 3 hours on the stage.

Myself I am solidly on the books and lore side of the spending divide - though I have minor dice goblinism and as a DM it always brings me good cheer to see PC portraits or anything else that shows the players have grabbed onto the world I have spun and are having a good time within it. I think the key thing to recognise if you are running a game is that people are bringing and taking different things from the table - tailor what you are doing so that everyone (including yourself) gets a bit of what they want and all should be well.

I also strongly agree with the point that advice to players on how to help a table go well should be part of books aimed at players. That side of the DM's advice should be as widely dispersed as possible - things like running combat smoothly, focus management, being part of the team, giving each other space in RP - players can then help make it happen once they know what you are trying to do. Perhaps session zero should also include a 'how to play in a way to get the most from this game'.

More sources can be found on the Big List of TTRPG surveys post
Posted by Xaosseed at 08:50