Retrospective of campaigns run - what worked, what did not

I saw a retrospective on a persons gaming (Failing Better on Against the Wicked City) and decided to tot up all the gaming I have been involved in over the years. The big thing I noticed here was there was quite a lot of gaps between games that actually gets accounted for by flare-outs, campaigns that never got off the grounds even after eating quite a lot of time in some cases. I will dig into the flare-outs and what went wrong in another post, but first - the great victories, the glorious campaigns run.

I guesstimated the hours spent running for the different campaigns to get an idea of how long all the campaigns ended up being at the table. This was surprising to me, I had felt some of them to be a lot longer than others but that may just have been prep time I sank into them vs how much actual play time happened. 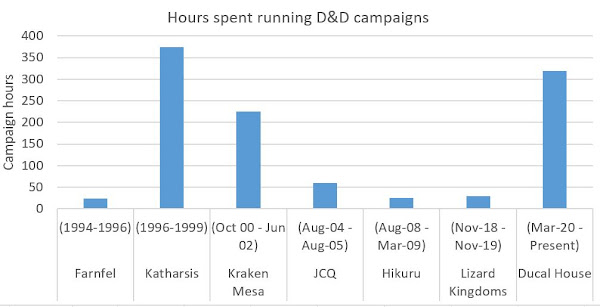 First up was Farnfel (1994-1996)
What it was: DM + 2 game cooked up off AD&D core books & Dragon magazine. Dungeon delving, wandering about, first stab at proper D&D after years of childrens 'lets pretend'
What worked: That it ran at all, that we figured it out by doing, that at least 1 of the players enjoyed it enough to continue for Katharsis.
What didn't: Janky as all hell, I'm pretty sure it was a railroad, memory pretty fuzzy.
Lessons learned: Basic lessons of what is important or not as the DM; get some interesting hooks, noone cares about that NPC you made up, don't waste time figuring out all the coins of the realm, etc. Key lessons that I think relevant for folk out there today - just get started, learn by doing. The learning value in even a few sessions of sketchy DM'ing is greater than months of reading about it.

Next came Katharsis (1996-1999)
What it was: First stable campaign - started off as a 20-man riot at a games day, kept going with a core crew for years after that. A classic AD&D campaign, ancient fortresses, a goblin crusade - then switches over into a monster-of-the-week Planescape campaign.
What worked: Ran consistently, players got to play through arcs. Had a villain the players properly hated that got a truly cinematic death.
What didn't: Went a bit Monty Haul in places, was utterly caught by surprise when the players fled their world rather than defend against demonic invasion.
Lessons learned: You don't need a lot of a plan once the table has the bit between their teeth. Further detail in this post on running Planescape. Mid-campaign switched the style changed completely from 'there is a big plot with clues and arcs' to 'Sliders with swords' and still we rattled on.

Throughout college I ran Kraken Mesa (Sep 01 - Jun 02)
What it was: flagship college game - working title 'Babylon 666' with the party in charge of clearing out an illithid fortress on Gehenna for the yugoloths.
What worked: Physical clues - to a point. Giving the players lots of agency, lots of resources and then letting them deal with big issues. The low level of the players and the relatively high level of the background threats (the Blood War) mean that talking options were usually a good idea. Players were pretty deeply invested in the mysteries behind it and there was plenty of off-table chatter about the campaign.
What didn't: I mismanaged one aspect where I was running into a subset of the players and effectively holding additional sessions with them, which lead to others in the group feeling hard done by when they got to hear about things that had progressed without them. This was fair. After having it raised, I throttled things back to 'only at the table' which worked for the remainder of its run. Game more or less stopped in the end when the college year finished and I could not continue - no big finale, downed dice and walked away. Main line clues were too obscure, cause and effect of things was left unresolved.
Lessons learned: Bring everyone along with the journey. More insight in use of clues here. Further detail in this post on running Planescape.

Next came JCQ (Aug-04 - Aug-05)
What it was: A sneaky, knives-in-the-shadows Planescape game - 3 players over AIM, as a party of fixers working for an interplanar trading outfit
What worked: Hard core setting experts, the players were hard-bitten planar adventurers and could get up to their elbows in the lore and make setting-correct calls. Posts for this went onto the college games forum and had a follow-along audience of a few folk there. I found flavour fiction really easy to write for this set of characters so the campaign log was an awesome set of cleaned up chat logs and fiction pieces - lost to bit-rot now alas.
What didn't: The campaign fizzled when one of the players lost interest; only 2 players left made that a fatal blow. Attempted to sub in another player but that failed. Social-bandwidth alongside the game was too low to save it.
Lessons learned: Last of the campaigns described in the post on running Planescape. Chat format can work with IC channel, OC channel and a direct channel from GM to each player. I did not recognise that the narrow channels of chat would cause me to miss signs that someone was not having fun until they were ready to ditch - similar to online play now, the social cues will be missing so deliberate check-ins to confirm folk are having fun has to be added to your to-do list. Once you know something is wrong you can course correct.

Last of my old-style campaigns was Hikuru (Aug-08 - Mar-09)
What it was: a Sindbad inspired al-Qadim / Oriental Adventures island-hopping swashbuckler game; set-up described here. I was overseas in a compound with a junk internet connection, I massively over-prepped because I had time.
What worked: Applying lessons learned of prepping what the party will find, giving them clues and then setting them up for a huge finish.
What didn't: Splitting the party works badly in AIM. Party was split across timezones that were tough for some. Ur-plot was never un-earthed.
Lessons learned: Go straight for the good stuff, forget the red herrings. Give players useable maps, props that help them. This campaign had much higher signal-to-noise in its clues and it worked; the party zeroed in on the villains and we got a big campaign finish.

After a long hiatus I started Lizard Kingdoms (Nov-18 - Nov-19)
What it was: Party of explorers doing strangers-in-an-ancient-lizardfolk-city that is decrepit but still occupied - 3 players, face to face, using 3.5e.
What worked: Spun up a setting, got 2 first time players aboard, got them exploring around a city. Dug deep into the best of online expertise to rapidly create tons and tons of content at the right levels - street level detail in the city the game was set in, major known points for the neighbours - so their reputations are known.
What didn't: Campaign currently on hiatus after half the players had second child, theoretically to be picked up again in the future.
Lessons learned: In Corpathium is the business for generating inspirational cities. See the Sholtipec tag for further info on this one. Also ran background Red Teams, more on which is written up here. This was a 'generated' setting in that I figured out the nation-state level then rolled up cities on generators and let their characteristics generate adventure hooks throughout the realm. System worked so well I wrote a Nanowrimo draft in the same setting and it was so vivid the words just erupted out of the keyboard.

Current home game is Ducal House (Mar-20 - Present)
What it is: Game I was asked to run after the last player from the Lizard Kingdoms overheard some colleagues talking about D&D. I set up a game with children of a noble house balancing troubleshooting with their hectic social schedules.
What worked: Ran a formal session zero right before lockdown hit. We went online and tested-as-we-went Roll20 + Skype. Players flagged the game as helping them retain grip on marbles throughout 2020. Most RP heavy game I have run in a while, has tested my note taking skills.
What didn't: Catastrophic success. Notes pile so big, I have had to modify my folder. Impossible to find certain references now. Family tree is an excel file. I made the home city location so interesting, the players ignored all out-of-town quest hooks because it would mean they missed things back in the city. These are all good problems.
Lessons learned: I tried to develop a process of keeping my notes in order using 1-page session prep and later varying-speed event trackers. I picked up a trick from an old pal about trying to mix in frequent 'special events' - like a social depth-crawl or an aerial combat bout.
Posted by Xaosseed at 23:49