tl:dr; I tried to verify/disprove the graph of campaign levels from D&D Beyond against other surveys - looks like there is more high level play than implied by D&D Beyond and potential demand for Tier III, Tier IV modules.

A discussion of how much high level D&D play is out there was raised on twitter with the point that this chart below from D&D Beyond is probably under-representing high level play. Conversation was started with "There is a difference between saying "high level adventures don't sell, so we don't make them" and "people don't play high level, so we won't make rules for it." by MT Black and one response was that "people use D&D Beyond for purposes other than maintaining a character they're actively playing, which biases the data." by Justin Alexander. 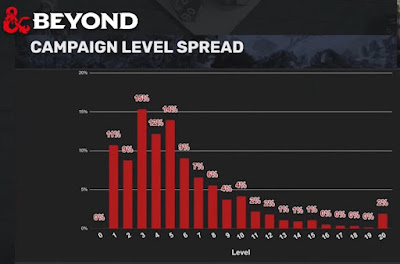 To try and get a sense of the scale of the issue, I pulled together some sources to see if high level play (> level 10) popped up once I looked at other sources. Some polls are only available at Tier level so I aggregated the level-by-level polls up to tiers (1-4, 5-10, 11-16, 17-20). Data is in table at bottom of page.

On a strict 'what are people playing today' - the D&D Beyond curve does not look a million miles off. The two datasets with character creation tools (D&D Beyond, OGANM) show a lot more low level characters as might be expected if people are using them to build characters for fun. We know from character class preferences that the groups responding to surveys and those with their data gathered direct from these tools have different preferences. 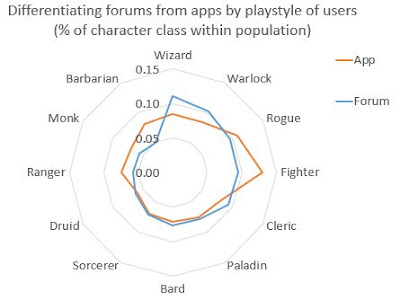 If we take the forum users as the enthusiasts, they could be the audience for high level modules if such an audience exists. The 'character building for fun' on the apps does not appear to transfer to a massive increase at the highest levels to offset this in the polls from forums and groups - in fact it looks like play is clustered in Tier 2, up to 10th level.

To me it looks like that instead of ~10% of play happening above level 10 as per D&D Beyond, ~25% of play could be happening there. That is a significantly higher chunk and does imply there is more of a market for high-level modules (10-20 level) but still not as large as the 5-10 mid-tier play.

There is more on campaign durations here - which found few tables are completing more than 2 tiers. Some of these surveys also asked about preferred tier to play (Dragonsfoot 2011 (gray) and Elderbrain 2020 (orange)) and where campaigns usually stop (Facebook 5e group, 2020) which gives some more nuance.

From these we can again see ~1/4 of players preferring high level play, more or less in the same pattern as what we see in where people are actually playing. It looks like the pattern of ~1 in 6 liking Tier III and ~1 in 10 liking Tier IV holds. What is very interesting to me is that the 'usual stop for campaigns' is much higher - saying that 40% of campaigns get to higher level play. Does this imply that a bunch of campaigns level up out of Tier II and then run aground in Tier III? Could this further support the point that there is not enough high level content available and therefore campaigns fizzle out once they get there?

This could be the case - since high level play gives characters lots more tools in their tool-kit and a DM then has to design scenarios to remain interesting and challenging when faced with these abilities, the demands on the DM are going to ramp up - possibly beyond what time they have available to prep or are inclined to spend. I would love to know whether those campaigns typically end because the DM got fed up or the players lost interest. In either case, it does seem to support the premise that there could be more of a market out there for well tune high level content that could be dropped into campaigns.

More sources can be found on the Big List of TTRPG surveys post
Posted by Xaosseed at 10:08