d6 Creeds of the Helltroopers

What kind of desperate, ruthless mercenaries sign on for the Blood War?

It is known throughout the lower planes that the yugoloths make up the lions share of mercenaries - effectively a third equivalent group to the demons and the devils that are for hire. The question is who are all the mortal mercenaries that join in? What could they possibly seek and what use can they serve in such a cataclysmic conflict?

I like Blood War mercenaries as an on-ramp to the Blood War itself. In their mockery of your plans, their casual pity as you say you plan to venture into the Gray Waste, the raucous offer to pay you back double after you both survive the battle - all these things can throw the scale and horror of the Blood War into relief before the players get there. The particular spin these mercenaries will have on the horrors of course depends on their own motivations for being there.

Assume there are some who are no more than fodder - tricked into serving, expected to survive no more than their first battle, their lives spent cheaply by their fiendish generals. This is not about them, their story ends after the first conflict. The ones I am interested in are the long haul veterans. The survivors - those who could be called blood war veterans. What role do they serve and what keeps them in the fight? 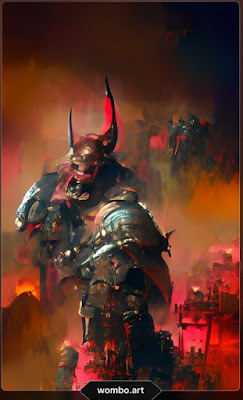 
Maybe you find them drinking away their leave in a bar in Ribcage, maybe they are manning the walls of the prison you have been flung into, maybe they are the other half of the force on this Styx landing boat you've been hired for. Wherever you find them, they're not themselves fiends though they operate beside them. They are still mortals like most adventurers, maybe they were adventurers themselves once. Maybe they might be willing to speak and tell less twisted lies than a fiend would.

The following are some thoughts on what drives a band of hard-bitten planars to stick with the Blood War.
1. Skulls for the War God. Cultists of war gods, holy warriors and the like will find ample scope to test themselves in battle. If worship is proving their prowess and slaying the mightiest foes, the Blood War provides ample scope for that
2. Fiend-slayers. Excusing the fact that their employers are also fiends, those who seek to winnow the ranks of the fiends can find a target-rich environment
3. Dearly paid experts. Siege warfare specialists, long range scouts, assassins or raiders - any particular niche specialty that mortals can serve in place of fiends could provide a lucrative and not immediately lethal livelihood. The devils will value the creativity they struggle with and the demons will value patience they do not have. Both sides hate and use mortals because they act as their foes do not expect and gain the element of surprise. The mortals themselves are here for the bags of coin and typically both skilled and highly motivated not to die before they can spend their coin.
4. Garrisons and trip-wire forces. There is a gap in most fiendish heirarchies because 'smart enough to take initiative' is also 'powerful enough to be useful at the front' - anything that needs a broad group of savvy-enough watchers whose main purpose is to quell trouble before it really kicks off will be a place where mortal mercenaries will fill a useful niche. Here you find the most reasonable seeming people (on the surface) - looking to take a slice out of the jink that flows through the Blood War without doing anything so fool-hardy as actually getting stuck on the front lines.
5. "I've got an angle." Fiends cannot be anything but fiends and therefore need cats-paws, infiltrators and servants to go where they cannot. Those who serve in these roles can be a complete mixed bag between vengeance driven villains no better than the fiends to misguided or foolish heroes who believe they are manipulating the factions of the Blood War to their own aims.
6. True believers. Where yugoloth mercenaries ultimately answer to their ultroloth masters and fiends are scheming amongst themselves, there can be lucrative positions within Blood War armies as a Praetorian force that the generals can rely on to stay loyal to them. These tend to have distinct motivations and be loyal to their fiendish master through ties greater than mere coin. Frequently cultists, even the presence of such a group can act as a spoiler for treachery and other efforts against their masters.

For any of these, you can assume their outlook will begin to pick up some of the local lower planar attitude also. I wrote up some tables for What is the core of this warband? (2d6), What shape are this bunch in? (d12) and How goes the Blood War just now? (2d6) talking about the Blood War on Gehenna.

Interactions with mercenaries like these could also provide the means to set up the coming horrors of invasion in an Alternate Avernus campaign.
Posted by Xaosseed at 10:50