tl;dr: large open tables have their own rules, needing more viking-hat* DM-ing and a focus on pace to keep the show moving.

On request from friends of the blog The Adventuring Party these are my notes on running large open tables. For background, while talking about Gygaxian tables with a large, rotating cast Savage, co-host of the Adventuring Party, mentioned the 'regular game with an irregular cast' that I used to run. As mentioned, we were never sure who would show up and sometimes it ran as seperate groups, depending on who was there when. Eventually my regular home game became a subset of that open table group but there were still irregular adventures run with the rest of the group as available over years. Nowadays we might call it an overly elongated funnel - a bunch of randomly generated characters thrown into hazard together until eventually out the far side a group of unlikely companions emerges. 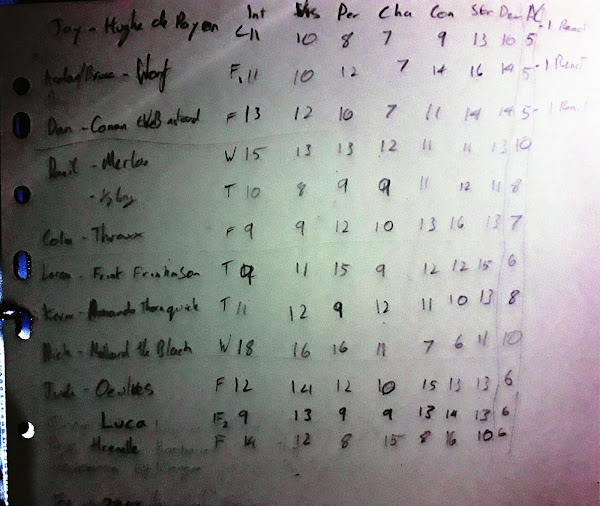 Roster of open-table regulars, circa 1997


The key point made in the description, that I want to dive into here is the question of whether there were any formal systems for managing all these players and their PCs - short answer no. The following are my lessons learned from running big tables - the key difference to standard (~6 or less) tables is you need to be extra sensitive to keep momentum up and make sure that everyone has something to do.

Most of what I wrote on making the game flow, remains true but the burden is even more on the DM if you are running an open table. You cannot assume people are fluent with the rules - you're going to have newbies or people used to different editions, systems or house-rules at their home campaign. The other big point is that you get no session zero to tune the content to what people might specifically want so you have to compensate for that and be very clear about what you are going to do. Give people the chance to vote with their feet before hand. There are no medals for stuffing extra people around the table who then have a bad time - you want to give them the information to self-select out at the get-go.

Now is also the moment to set a couple of expectations for the players at this type of come-one, come-all game: that they are here to be 'adventurers' - if they hear the screams of someone in distress, they're going to hurry to the rescue not order another round from the innkeep. Similarly, they are expected to stick together - no brooding loners, team-players only. Splitting the party can be handled at normal tables, it kills bigger tables so state this explicitly before started. I was pretty gnarly on this point when I ran these tables, DM Disciplinary Meteorites generally had to be deployed only once to make the point.

Next: physical set up is important - you need to have everyone able to see what is going on which is why battle-maps become less ideal as it is hard to get a dozen folk around a map. Whiteboards or flip-charts come into their own here when everyone can see them. I used to run from my feet from within a horse-shoe set of tables in a conference room when I did this kind of thing - figure out what works for you but pay extra attention to sight-lines from players to you and whatever displays you are using - you need to be able to see everyone to gauge energy levels.

Once that is done, K.I.S.S. is your golden rule - keep it simple. You are trying to get potentially a large group of strangers spun up and throwing dice as quickly as possible so great if you can give people a selection of pre-gen characters or if not run a vanilla palette for first-timers. Similarly, equipment lists can be dreadful time sinks while people sort out starting equipment - best to offer the bundles of gear or randomly rolled, whatever gets the characters 'on the road' with the gear as fast as possible.

Once you get everything rolling, once the players have all played ball with you this far, it is on you the DM to push as much fun at them as possible and keep everyone occupied - while standard tables can have more 'everyone gets a time to shine', for these large tables you want to try and keep as many people 'in frame' as you can.

Starting off, the major complexity driver for all of this is going to be the sheer number of adventurers you are dealing with, there is going to be lots of fun in that so no need to go too baroque with your set ups - stick to the classics. A narrow-corridor dungeon raid is not the best for so many people, better to do site encounters so there is more contact frontage for everyone to get involved.

Encounters with lots of simple parts are good, it gives everyone something to do. Terrain hazards and some classic passive traps (pits, swinging pendulums) are great because everyone can engage with them. An ambush in the forest when there are lots of trees to hide behind and enough people to do actual pin-and-flank tactics is great.

Running all of this you are going to have to anticipate odd sods will turn up and be ready to just roll with them. Rules lawyers, That Guy and other dread spectres of the tabletop scene can be partially defused by running this big group against lots of simple stuff - give them their unlikely rolls and edge-case rules calls, let them knock out those few goblins or whatever - the place where these folk can really cause damage is when they punk out a set-piece big bad. Deny them that target and you can just let them be improbably 'lucky' without ruining other peoples fun (as long as it is against monsters - if bad apples start poisoning some newbies experience, kill them. A messy example of what bad sportsmanship brings is usually not necessary more than once.)

The key piece of successfully running a large table is 'plate spinning' - the whole table will probably break down into some sub groups, possibly based around roles like sneaky / tanky / range-damage, possibly just by where people are sitting. Cue people up that you are coming to them, then give them a physical count if they don't have their actions ready. Cut newbies some slack but put a clock on others, politely, but emphasize that things have to keep moving. Try to feed each group something - even just deciding how to approach a trap - while you deal with others.

Note you can get away with people being 'off camera' if 'on camera' is sufficiently high stakes and interesting that they are happy to watch but this is risky, very easy for people to drift off and having to continuously recap to people at a large table is death for momentum.

Referring back to my old article on game flow the key points here are:
- make it easy for people to pay attention - check what people want to be doing, trust your instincts of the energy levels about the table
- 'just use bears' is your friend here, simple monsters, enough for everyone to fight one
- take breaks, but steal from Hollywood - take them at a cliff-hanger moment so people want to get back to see what happens next
- run a count-down if the group should be under pressure to make a decision (rolling bolder, rising water, anything that prevents a long discussion)

Finally, if things are bogging down at a trap, a tactics discussion or anywhere revert to the old writers staple and have a bunch of cultists with swords burst through the door.

All of this is a historical document at this point - it does not work over VTTs - you cannot have that many people trying to talk at once on a video call, even if it does solve the sight-lines problem. For another good perspective on running large tables see "Ask The GMs: Many Hands, Mild Insanity: Large Groups Revisited" on Campaign Mastery.

A thread on this with comments of varying utility appeared on Reddit - some grains of value in among all the chaff of "don't".

* Finally since a number of folk asked - Viking Hat DM's are "My way or the highway" style - what the DM says, goes.
Posted by Xaosseed at 10:35