Testing a Hidden Depths table for a site - here we take the Palace of Thenya with all the family and servants in residence. I have adopted some of the excellent design improvements from Weaver.skepti.ch and must also thank the mysterious stranger who ran up all the correct probabilities on AnyDice (tabulated at end of this post). 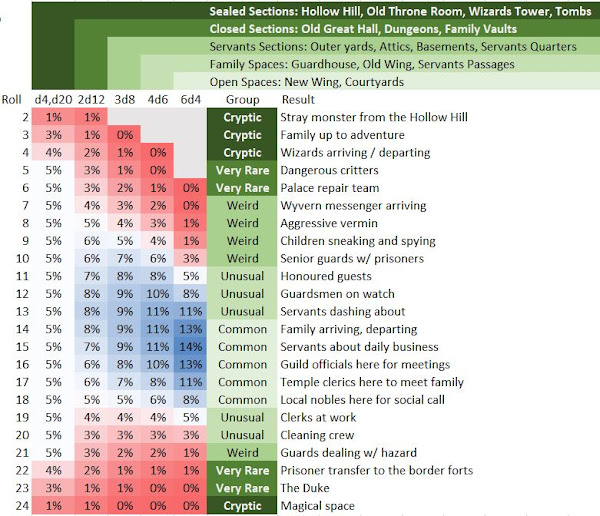 To test all this we take cousin Lara, competent swashbuckler who cannot sit still with 24 hours to kill who decides to wander about the Palace. Every hour she picks between going deeper into the Palace (1-2 on d6), staying on this level (3-4) or heading back to the core areas (5-6). I rolled up a bunch d6's to get her random path through the palace then rolled the relevant encounter dice sets depending on where she was every hour.

Does what I wanted it to do - 6d4 and 4d6 trended to mean quite a bit, 3d8 and up got swingy and the weirder things started coming out but we still got some of the more standard things. I like this for the effect of stirring more strangeness in on top of the relatively mundane - especially for places where some parts of a site are inhabited and active and those people could be found across the whole site.

The updated tabulated numbers look like this, thanks to our mysterious stranger who worked it up on AnyDice for me:
Posted by Xaosseed at 10:45