tl;dr: saving time world-building and getting fast player buy in with a focused session zero.

After my previous home campaign stalled out, a player came to me and asked me to set up a game for them and two friends of theirs. This was the first time where I had not had a campaign in mind first and shopped for players after so I decided to try something new.

Player 1 had played my previous home campaign, player 2 had heard about D&D through podcasts and was keen to try, player 3 was completely new to things. I decided to tune my usual approach to fold in some of the 'session zero best practices' I had read about on various blogs. Ahead of running anything I set up time to get everyone together; we booked a couple of hours and met in a local bar for a session zero.

The key pieces for the session were:
1. Why are you all together as a group?
2. What is the tone of the game you want to play in?
3. Who are you - character gen - and what impression do others have of you?
4. What are things you want to see in the campaign, what do you not want to see?

Part 1. Why are you all together as a group?

First was the hook to pull things together. Bitter experience has shown that there needs to be a good match between the strength of the bonds holding the group together and the type of campaign being run or it turns into a mess. I had a few ideas that I brought to the table but I prompted the players for ideas to start with 'why do you hang around together' - there were ideas like 'broke out of prison together', 'neighbours', 'members of the watch' but we eventually decided on 'grandkids of the local duke' - this step blurred a little over into step two - the kind of game we want to run.

At this point, after talking it through a bit I suggested all scions of a dragon-blooded noble house and we began to sketch in elements of the realm on a map as they came up. 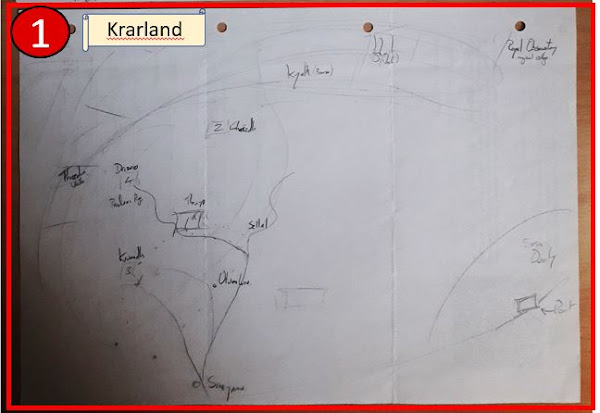 2. What is the tone of the game you want to play in?

Next step was what tone did we want - riddles and wits could be anything from Rupert Bear levels of childrens story through to Dune level of bloody wheels within wheels. We settled out on a tone of a Renaissance-era, Pratchett-esque setting, with lots of energy - more high-spirited than grim-dark. Certainly enough for me to work with. 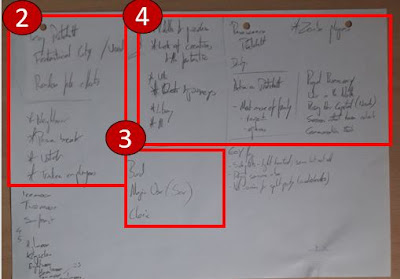 At this point I put it that provisionally the players had returned to the Ducal city because grandfather the Duke was rumoured to be dying and they had come back to say goodbye.

Next was to do character generation. We were using 3.5e as I had not a lot of 5e under my belt at that point. First there was a round of what kinds of characters people would like to play and then I suggested some classes people would like to check out based on those character descriptions. We ended up with a Bard, a Sorcerer and a Cleric. At this point we diced up everyone's scores using the 7 x 3d6, drop 1, arrange to taste. I had two PHBs at the table and some pre-printed character sheets - between myself and the previously experienced player each of the newbies got an assistant.

From there we went around the table and each player gave some background on their childhood, major influences and what they had been up to before campaign start. Everyone did 3 chunks - where in the duchy they grew up, what was their early childhood like and broadly what they are like today. Finally we capped that with how they are perceived by their cousins. 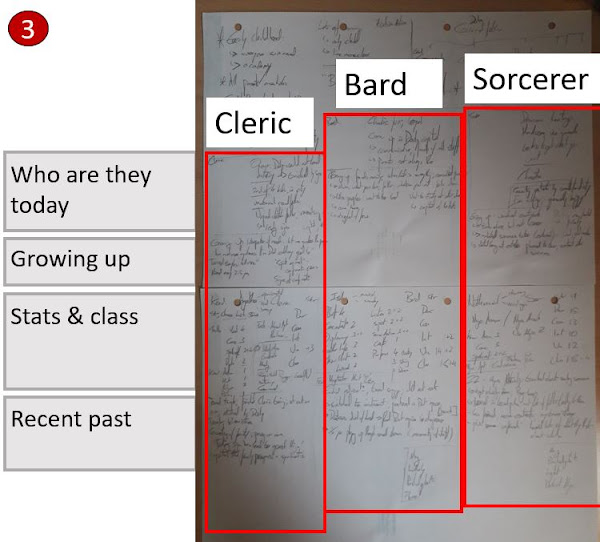 The party core motivations crystallized around all these cousins recognizing each other as the 'forward looking' ones who want to harness the new era of change to bring new strength to their house. All are concerned that the current prospective heir is too traditionalist and would lead to them being overtaken by the guilds or other groups gathering strength in this new era. The opening objective was 'steer the house to prosperity' by making sure if the Duke died he was replaced by the Bard father, not the eldest son or the Clerics mother.

Lastly we went around the table to get what elements they wanted to see in the game and what they preferred to avoid. This was the biggest departure from previous practices for me - before this I would have worked up a menu of options and given people the chance to pick the campaign they wanted to play in, then tried to feel out what they preferred or not at the table. The idea of explicitly asking your players, getting their inputs at this stage is not the school of GM'ing I grew up in - more's the pity.

The 'what do we want to avoid' list was pretty brief - no zombie plagues, no grinding grim-dark. Nothing to cramp creativity there.

The 'what do we want to see included' was something much more novel for me - previously I would have just 'put on the show' and figured out by trial and error what was preferred. Instead, from session zero I had a handy reference to flip back to if I needed some ideas. From this feedback on what kind of game was wanted I should include more:
- Riddles and puzzles
- Strange creatures and the fantastic
- Quests and journeys
- Opportunities to win through their wits
- Libraries

Very helpful for me; this is not tomb-raiding, we're not scything through goblin hordes, this is puzzles and exploration.

At this point we wrapped up by setting a kick-off date for session one and giving everyone the homework to assign their skill points and pick their spells.

Conclusion - this eased my workload

For me as a DM I had a blue-print of what elements the players wanted to see, a tone to strike, a rocket-fuelled over-plot and a bunch of geographic landmarks that had come up in character creation to weave into the setting - including a coastal city where the bard had spent a block of time, verdant southern reaches of the duchy where the sorcerer grew up.

Before session one I set up the local city, figured out the time of year, worked out an opener to start things with a bang and hashed out the broad details of the map. I also spent a lot more time than I would have otherwise on working up the family tree, figuring out what the relatives are like - the other pieces on the chess board for getting a new Duke installed - and the recent family history.

All of this was influenced by the 'enough, no more' philosophy from Sly Flourish and others and saved me a bunch of time by making sure I was putting effort in places where the players cared. I also banked the lessons from "applying the OSR" to crush my workload by using generators.

Once everything started rolling, things began to change, of course, but it was very helpful to me to spread some of the load across the party by getting them involved in the world-building early - just by creating their characters and saying what they wanted to see next. It also completely eliminated my needing to pitch or sell the campaign which was great.
Posted by Xaosseed at 08:04