tl;dr: when in doubt, dragons, undead or other PHB humanoids will be preferred monsters.

I found seperate surveys asking the same 'what is your preferred foe' question and decided to compare them. There is a slight difference in that the Elderbrain survey allowed up to 5 votes per respondent while the Twitter one had a single choice each. On average the Elderbrain respondents voted for 3.7 preferred monster types. Even with this effect smoothing out the peaks by allowing 2nd, 3rd and 4th choice monsters to get votes, the most popular foes to fight are clear. 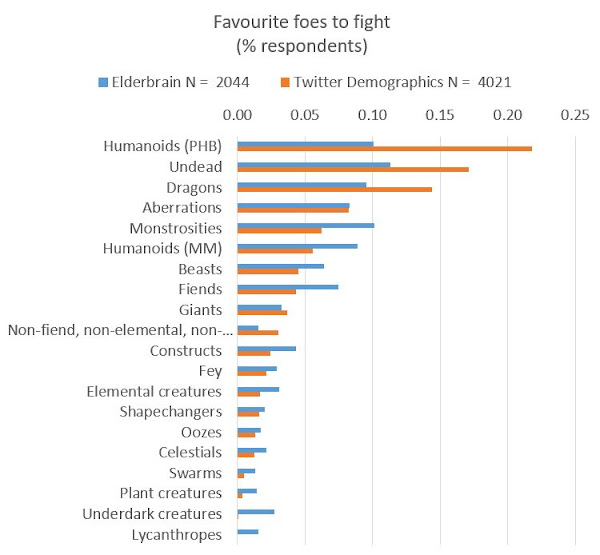 The broad trend of preference is similar between the two graphs - taking the twitter demographics as primary since it has higher sample size (4021) and only a single preference each, we can see the Elderbrain survey broadly agrees with some interesting differences.

The top 3 of PHB humanoids, undead and dragons are clear favourites. Of the next 5 favourite, the good show for beasts, fiends, Monster Manual humanoids and monstrosities suggests a lot of second and third preference votes going to these. At the bottom of the chart, the poor showing for Underdark creatures and lycanthropes when respondents have only a single favourite to choose suggests all those other votes are second preferences at best.

The big surprise in all this to me was the distinction between PHB and Monster Manual humanoids as classes of foes. I am going to assume that the humanoids on peoples minds were humans, elves and dwarves not gnomes and halflings and I would have expected classic goblins, bugbears, kobolds, sahuagin and the like to be more popular to fight. Is this a window on human-only games, with no monstrous humans at all in them? Or games with elves and dwarves as primary foes? We cannot tell here but an interesting question.

This is a handy 'popularity check' for what foes to bring to the table. If you wanted to be very mechanistic you could use this to decide where to dedicate your prep time and which foes to set up fights with. Based on this I would prep a lot more fights with my local thieves guild, rival adventurers and opposed nobles minions. Then Undead and Dragons come through as the 'no-regret' option - hard to go wrong chucking them into the mix. Then after that I would stir in a bunch of 'monster of the week' aberrations, monstrosities and beasts. Top it all off with some non-PHB humanoids to fight on the way too and from the rest. Using this recipe, according to these responses, 2/3-3/4 of tables should have gotten to fight their favoured foes.

Twitter Dungeons and Dragons Survey.
Posted by Xaosseed at 08:44