Burgs & Bailiffs: Warfare Too is only about warfare: from skirmishing to large-scale battles passing by castle-building. As said in the intro, this is about giving you tools to bring medieval warfare to your medieval RPG and you probably will not use all of these but you may well find the ones that suit you. 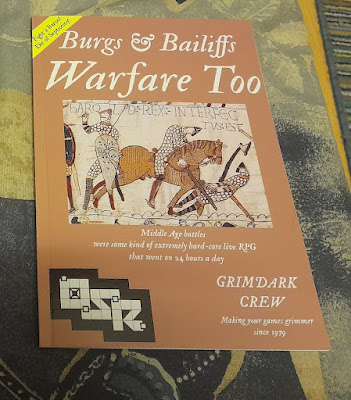 At €€2.50 this is even better value! As before shipping will kill you if you order it alone but next time you go anywhere near Lulu, throw these in on top, you will not be dissappointed

So what is in here?
Warlord (2 pages) - a class for leading men
Warbands (6) - light fast rules for fights with bands of 7-35 members
Battlefield Encounters (5) and In Battle (5) are lists of encounters and skirmishes that happen as parties traverse battlefields
After Battle (8) - dire fates for PCs on the losing side
Cost of Castles (8) - on the time and men required to build castles
Goedendag & Fransizka (1) - some interesting weapons

My favourites - well I have a good few favourites but the Battlefield Encounters and In Battle are the heart of this and I think probably the most universally useful. Battlefield Encounters is good meat-and-potatoes things you run into while running about on the battlefield. The In Battle article is the core - with some phases of battle, morale rules to resolve the whole thing and a nice light-wait set of rules to make a fight seem meaty and bigger than the players alone but also something they can have a meaningful impact on.

The Warbands rules I would see being used at a scale smaller than the previous two articles - one where half-to-three dozen warriors is a substantial force. Given this is a space where PCs will ofter operate, this if valuable stuff. I would recommend a read of A Practical Guide to Medieval Warfare: Exploring History through Wargaming for more detail to flesh out this scale of fighting. Good to have in your pocket, another nice article.

Honourable mention should also go to 'After Battle' for the many, many appropriate illustrations of the d20 dreadful fates your losing PC will face.

I did not love the Cost of Castles article - while I see the time-and-materials approach done here is done pretty well with some nice examples - I would like things a step more abstract with specific structure types 'large tower', 'keep' etc. because otherwise I have to figure out volumes of wood and stone and this does not fill me with joy. It may do for you, in which case godspeed, but I think I would turn elsewhere for my stronghold construction guidelines.

All in all this is a great set of tools in the toolkit, well worth the low, low price if you can bundle it with something else so shipping is made manageable.

For another perspective you can check out Reviews from Ryleh.
Posted by Xaosseed at 09:39