tl:dr; a new take on familiar races, a rich history and lots of interesting sites to explore and civilizations to encounter, delivered with 'naturalists sketchbook' art that makes it feel real.

I backed the Studio Agate Encyclopedia kickstarter - having backed just the pdf during the Creatures campaign, I used the opportunity to get a hard-copy of Creatures and the Encylopedia... and some other stuff. Creatures I reviewed before and liked its new angle on classic fantasy and the 'sketches of real fantastic places' art style. 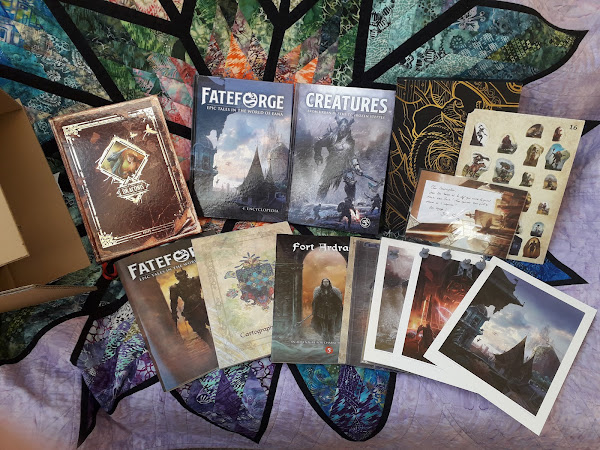 The treasure trove that turned up.


This time around we take a look at the Encyclopedia - the world book which describes four civilizations found in the world through history, locations and items. First impression is that this is very good looking - as before lots of art and a great deal of graphic design work to make the text look like an in-world scrapbook. The art throughout is really nice, there is a distinctive house style that I like quite a lot - very naturalists notebook with pencil sketches, cutaway diagrams, and maps mixed with classic fantasy art spreads. It looks great and conveys a lot of the sense of the world. 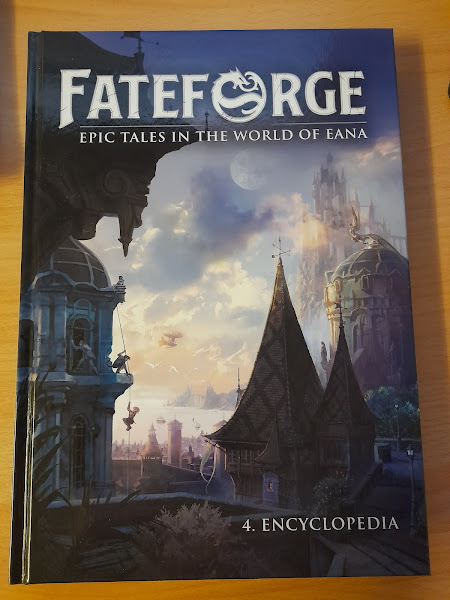 We get lots of lore - this is a world delivered in character which is an interesting choice. Most books give us perhaps an chapter opener or some snippets of in-world character text but the proportion is much higher here - say approx 1/4 of every 2-page spread is an in-world note or quote. These vary from text from books to tales told by campfire.

In the loops and repetition you see a realistic construct of things that have importance, compared to the things that are practically lost to time, only known as legends. This gives nice flexibility to tune the world as you need since all these facts were just heard as tales.

Significant chunks are delivered as travelogue and also marked up throughout with the Fateforge indexing. 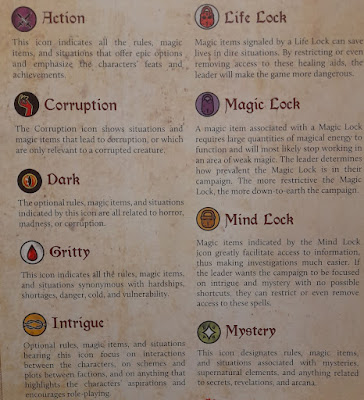 I like this modular system - throughout the book passages are marked with a symbol that identifies the mood or style of game that element contributes to. An example would be the Dark tag, identifying elements that contribute to horror play - depending on what you are running, you can then steer players towards or away from this element. This makes it much easier for a GM to foreground the appropriate elements for the style of game being run. I like it as a neat way to run the style of game your table wants in this setting.

So what is in here chunk by chunk?

In the Free City section we get our urban sandbox. This is a venetian republic type city where money rules all and the city is made up of a multitude of districts, militias, guilds and criminal networds. Lots of adventure potential in all those factions rubbing up against each other. I particularly liked the criminal factions, each lightly sketched and really interesting, like the salt circle who are a group of assassins. Not just a ruthless asassins guild as per standard fantasy trope, the salt circle is a group of avengers, righting only injustices and contactible only through dead drops.

The Drakenbergs are the classic adventuring wilderness - high wooded mountains with dwarves and dragons - the "open fantasy setting" as the authors say themselves. Here you can drop in whatever you want for your game among the many valleys, fjords and forests. There are also great locations and mysterious history which give good material to tempt explorers. I think the level of historical detail is very well done, not so much to become tedious but enough to convince would be adventurers there was a great peoples and there may well be treasures remaining in the ruins they left behind.

The Great Kaan is where the truly interesting and unique parts of the setting are and I agree with the choice to devote more pages to it. We get 20 pages of history, 40 pages on the Septentrion, the frozen mythic north and 100 pages on Kaan with all its multitude of civilizations. 20 pages of Kaanate gear close out the section. Here we have our orcs, goblins, hobgolins and others roaming around with significantly chunkier histories and traditions than most settings give them. Here they are peoples, with some traditions that can make them fine antagonists if you want - raiding nomads in some instances, diabolic cultists in others, vanguard of a conquering emperor elsewhere.

The Septentrion has some great sites - the last remnants of giant civilization, the frozen wastes, the demon haunted north, nomad lands and the primeaval forest. Here in particular the vistas in the accompanying art convey the wonder of the place and why one might want to go to these places which - from the grim descriptions - one might thing one ought to stay well away from

In the Old Kaan section we get all our cities of history, mostly still here in something resembling the flower of their glory. Samarkand, Thebes and Babylon were influences I was able to spot and these sit alongside the stranger cities shaped by their fantastic rulers - the diabolist city, the necropolis city deep in its crevasse. I reckon a handful of others could be recognised by better historians than I but in any case there is a wide range of really interesting locations scattered across the Kaan. Each of these cities gets a keyed map, major locations, details of the power players and notes on what is important to that city.

There are a lot of gear pages mixed in - throughout the book - one for each region and the general items in the appendix - all told ~1/6 of the book.

I have one bone to pick with this book which is on the formatting, the text size feels off and it took me ages to figure it out (the in-house testing team actually figured it out) - the text seems to be too large and spaced out in places, particularly on the item description pages. My gut feel is that it should be more compact blocks of text among the lush art because for some reason, even though the text size is bigger than WotC standard, it feels harder to scan than it should. Not going to stop me getting another of Studio Agates books.

To wrap up - you get a big fresh block of something that feels different with this book. This seems a bit counter intuitive because often the inspirations for elements of the world shine through in the architectural styles and in the archetypes of civilizations among others - but mashed together with fantasy races, high magic, giants, dragons, and the rest and it becomes something very new and refreshingly interesting. Perhaps it is the French perspective, perhaps it is just Studio Agates house style but we have in Encyclopedia a setting that both feels real and different but still has logical places to run all your favourite tropes should you so wish. At next opportunity I will be trying to bring the Great Kaan to my table.

At time of writing the next kickstarter had just launched - Creatures: Netherworld - Monster Compendium & Toolbox - "180 creatures, playable species and new game options in this 400-page book for your next 5th Edition campaign." If you want a one-stop-shop to pick up the back catalog, you have until the start of June 2022.

Another review can be found in #UnboxingDay ~ Fateforge Encyclopedia by Armchair Dragoons.
Posted by Xaosseed at 10:19