I retrieved my old DMG, this was the book I learned from back in the day and going through it I note it spends a lot more time trying to teach me how to play than newer editions. Maybe things really were easier back in the day.

This was the AD&D DMG from 1995 - a refresh after 6 year as it says in the introduction. 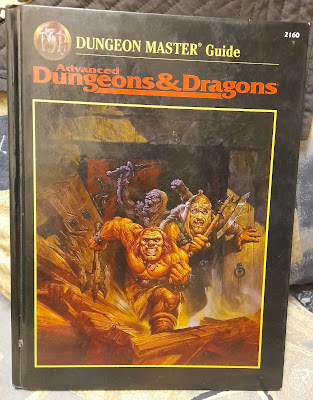 I have no memory of where I read or heard the point - perhaps on the Adventuring Party? Or the OSR discord? - but it was said that this was the last of the DMGs that actually tried to teach you the game. The shadow of the same argument crops up in Alexandrians 'cargo cults' point - that there are lots of folk in the hobby that have seen adventure shaped things but the teaching of how's and why's fell away somewhere. Looking through this book with its full-on focus at teaching people how to run a game, I begin to see the point. I can also see here how all the arguments about 'playing D&D wrong' arise. For those who read and absorbed this book, the word was very clear - here is how to play, this is the style of game, we all have a common reference now.

Opening it up I also found the inside cover product lists - probably the single most effective marketing spread I have ever encountered. You just get your hands on this and suddenly you are aware there is all this other stuff... for my completionist soul back in the day this was a siren call. The inside front covers were the rule sets - things like Complete Fighters Handbook and Player Screens (!) for players, adventures like the Night Below campaign or supplements like the Arms & Equipment guide for DMs. The inside back covers were the real temptation - six settings laid out under "Worlds at your doorstep" - Mystara, Forgotten Realms, Ravenloft, Dark Sun, Planescape and Dragonlance - all with a 4-line description and 5 product thumbnails. Planescape had the Campaign Setting, Planes of Chaos, Monstrous Compendium Appendix I, Well of Worlds adventure anthology and Eternal Boundary adventure. 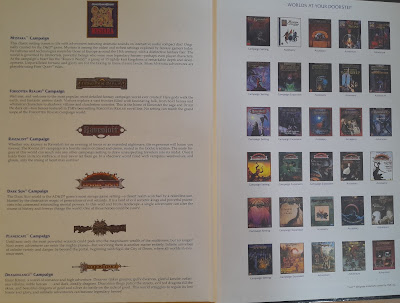 Not since the grainy images of the Horus Heresy in my Space Crusade rulebook were tiny images scrutinised so carefully. Looking at the back cover, the price point was $20 US or £11.99 UK. A different world.

So we have ~ 40 pages on character building in the first 5 chunks, fair enough. Lots of practical advice like new characters joining an existing party starting at the level of the lowest character in a party. The discussion on alignment is a lot chunkier than in later editions.

Money and Equipment was interesting because the lists were in the PHB and here we have discussions about all the different forms of money, starting with an example of a mercenary being paid in Venetian ducats and English pennies and the like, through to discussions of letters of credit and how those can be good treasure. There is a great table of what gear is available in what era from Bronze age through to Renaissance. The explicit mention that your games could be set across a range of historical eras and not our standard arcano-steampunk was a refreshing reminder.

Magic here is mostly a discussion on how players get new spells, the finding and seizing of spellbooks being the major way you learned new spells, regardless of levelling up for this edition.

Combat is the largest section apart from the magic item descriptions with a lot of effort put on how to portray and run combats as a DM at the table. This is one of the places where teaching focus is very obvious, other recent editions I have read (3.5e, 5e) have lacked this assumption you know nothing about how to do this.

Treasure is gets a much higher page count - discussing the placement of hoards, the logic of their existence, balancing - Monty Haul campaigns are explicitly mentioned - whether magical items are common or rare - and includes a significant amount of detail on how players can create items, recharge them or destroy them. This is from an era when characters did not gain so many tricks and abilities as they advanced, a character stood out more from their arsenal of magic items than their 'fighter' or 'wizard' abilities. It maps to my recollection of the era - magical gear and its use was more the focus than a PC's class abilities.

For Encounters also we get lots of solid, crunchy advice - starting with a page and a bit of 'what even is an encounter' by offering a set of 4 vignettes and asking. Meaningful and significant are the words here, saying time should be spent only on encounters which meet that bar. There is a section on 'fixing things in play' that gives carte blanche for dice fudging if the DM has fluffed their encounter set up and made it far too hard.

NPCs are discussed with advice on how to play them, and lists of traits to use to create distinctive mannerisms. Handy, though here they are just lists where later editions make it a table you can randomly roll on. A minor point but it was one where I spotted that things got refined in later editions.

Time amd movement talks around how gameplay requires strict time records. There is an assumption of some fairly chunky DM prep in some of the points, I can see where I got my view that the game requires a ton of world building and having all the details nailed down. After reading all of this the first time, I started with a map and got down to the level of detail of sketching the coinage of the realm - in hindsight, that was not the best spend of time.

The giant magic item index has all your classics including big mad artefacts like the Rod of Seven Parts.

Overall this was full of 'how to play' advice and useful worked examples. Was this the last DMG that assumed people were coming cold to the game? Comparing it to my 3.5e book and it is chalk and cheese - the next edition 5 years later was much denser in terms of smaller text size, more text packed onto the page and just stuff. There was an assumption that you were going to be playing on a grid, and a lot more setting (lists of Gods, etc) included in the book, generally a lot more to handle though possibly also better value in the sense that all you needed was there. This edition of the DMG is very light on the setting background, which makes sense if Mystara, Forgotten Realms and Dragonlance were all being pitched as settings at the same time (never mind the more strongly themed settings like Dark Sun, Planescape and Ravenloft).

By the time we get to 3e/3.5e from here the philosophy has switched from what is a tool to learn the game to a rule-set that rewards mastery. 4e and 5e rolled this back a bit but it may well be worth revisiting elements of this approach, certainly I think I had an easier time learning the game off these books than I would have if I had come cold to 3e. Even looking at what is in the 5e Starter Set, it gets right into 'this is the sequence of a combat turn' and there is no where near the same level of hand-holding. I wonder if there could be a 'Intro to DM-ing' book that is a free downloadable companion to go with the DMG - really basic first time stuff. Possibly a lot of that heavy lifting is done by streamers - first timers learn all these basic by watching.

A nice trip down memory lane for me, a window into a different era of the game - the really big different I recall is the 'arsenal of items' side of things - that solutions were found in the characters pockets and scabbards rather than in their lists of abilities.
Posted by Xaosseed at 08:51