tl;dr: solar system building with the original Spelljammer rules, testing to see how much adventure can be rolled up

From Chapter 5: Celestial Mechanics in the Concordance of Arcane Space we have rules for DM-Created Universes which gives a checklist:
1. Type of SYstem
2. Primary Body
3. Number of main planets
4. Orbit distance from primary
5. Size, type and shape of planetary bodes
6. Presence of any civilizations with spelljamming capabilities
7. Distance to the crystal sphere 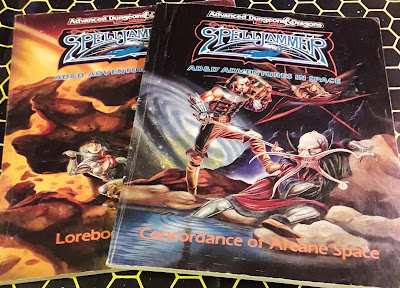 Photo of own well worn copy of Spelljammer (2e)

So together with the in-house testing team we diced up a crystal sphere and its contents, to see how much adventure we could squeeze from an hours work.

First we rolled for type of system and primary and got a fairly standard set up of primary-centric with a sun (fire-type) primary and six planetary bodies in a counter clockwise orbit. So far, unremarkable.

Many, many d100 rolls (and a half-dozen d6s for orbit distance) later we have the following and things have gotten stranger.
Planet 1 - a Mercury-sized earth-type flatworld with a ring, right next to the sun, inside Mercury orbit
Planet 2 - a very small (Ceres-sized) water-world with two moons, an air-type and an earth-type a little further out - where Venus is
Planet 3 - a Neptune-sized air-type flatworld that is hotter than normal at the outer edge of the inner system, beyond Mars orbit
Planet 4 - an enormous Saturn-sized water-world surrounded by asteroids about as far out as Jupiter
Planet 5 - an enormous fire-type elliptical world that is colder than normal further out again, between Saturn and Uranus
Planet 6 - an enormous water-type flatworld with an ice-ring and an earth-type moon at Uranus orbit

The comparison to our Solar System is from work by Tom Kalbfuss on the Giant in the Playground forum. He also made a nice chart here.

From here we are done with the generators, the rest of this is following the falling dominoes of implication. First impressions - few enough places to stand in this system - lots of water worlds. Second - for a couple of the worlds - 1 and 2 - they were small enough that the old sci-fi trope of "only one thing happening on this planet" could actually hold true. So to find out if we have any civilizations with Spelljamming capabilities we are going to consider what could even exist on these strange worlds.

Working through the planets, our first thought was planet 1 is obviously the realm of heat-lovers so Fire Giants, Salamanders and the like. Being the only earth-planet and right up next to the sun it seems a natural place for weird solar forges and smelters. What metalworking is done in this system is done here, in polished quartz solar furnaces. This place is going to be deadly hot, unless you approach the tidally locked dark-side.

Next planet 2, the in-house testing team figured elves get everywhere so there are probably elves somewhere in the system and here seems as likely as anywhere. Given this is a tiny blob of a water world, this a resort, with elves floating about on luxury ships, coming and going through the feywild and rarely interacting with the rest of the system. Native flora and fauna are benign with a food-chain that tops out pretty low down due to the constricted size of the world.

Next world, planet 3, a hotter than usual air-disc-world. We put a colony of air genasi who love the strange atmosphere. This place is tropical, a Venus-style hot-house with giant floating plants growing in the humid atmosphere, lots of tropical avians as a biosphere, some aaracockra and what Spelljamming infrastructure as exists in the system to be found here. Like the islands of the carribean in the golden age of piracy, water and hunting can be found here but no fittings and little enough resources for repairs. The major downside is that everything rots and corrodes here much faster than you might expect; hulls rot or become infested with worms or barnacles, fixtures rust away, food spoils. Water can be harvested from the rain.

Next we leave the inner system. This is a gigantic water world, the asteroid catcher for the inner system like Jupiter serves for us. The planet has been disrupted by asteroid strikes and is currently a primeaval sea with all the odd creatures of pre-history swimming about. Trilobytes reign supreme in the depths. You can find examples of the original giant nautiloids that mindflayers long-ago twisted into their ships here.

Next, our elliptical fire world is where dragons reign, the two ends of the ellipse being the cinder continents where reds and golds have flourished with a seething ocean of fire between them where elementals play. The dragons gather tribute from the bounty that falls from the skies or have their fire-loving servants fish gems and metals from the seas of fire. The red dragons have a culture of glory-seeking and risk-taking while the golds have a baroque republic like old Venice.

Lastly we come to the outer water-disc-world. Here, tidally locked, the inner face is liquid and the outer eternal ice. Kuo-toa wizards lurk in their city-states neighboured by sahuagin, kraken and dragon turtles. On the ice outside, ice-blooded polar bears stalk. This great flat world is so enormous all these entities rarely interact.

Second order thoughts: for Ice-disc, there will be long spells of freezing when Smoulder is far away, then periods of near-warmth as it passes closely, a second sun in the sky.

There are no dwarves or humans here - both distinctly terrestrial species; without land of reasonable temperature we are left with stranger things.

All told, this does not look like a system that would crop up on many Spelljammer maps - there is wealth here - crafts from Forge-disc, hunting spoils from the Deep and metals and gems scooped from Smoulder, but all at cost of hazard and all very far from hope of rescue or repair. In this sphere, you screw up, you are on your own. Those that visit this place would be like whalers, venturing far off the trade routes seeking riches, knowing noone will come to help them should they suffer misfortune.

Certainly, adventure suggests itself - rescues, interplanetary transport in this sphere with few spelljammers, defending a community against a stellar threat, hunting something extinct elsewhere in the Deeps, forging a mighty weapon on Forge, daring the molten oceans of Smoulder to trawl for wealth - or stealing it directly from the dragons.
Posted by Xaosseed at 09:18