We wrap up with the Kobolds Art Exhibition zine by Evlyn Moreau. Links to the review and part I of play using it, Part II - Adventures in Paintings, Part III - the Rescue, Part IV - the Show, Part V - the Tour, Part VI - the Chase and Part VII - the Delve. A final round up of the zine as a supplement is at the end of this write-up.

Significant time has passed since last the party directly interacted with the Kobolds - they had quested without them to recover the masterpiece painting they sought, fighting mimics, carrion-crawlers and a terrible ethereal predator - fierce enough fights that they had not brought the kobolds along with them. The masterwork recovered, interactions were handed off to the Lady of the House, the bards mother, while the party dealt with conspiracies, magical artefacts and divine visions. As the party now prepares to depart the palace at dawn to settle the unrest that has shaken the north of their family realms, the cleric decides to bid farewell. The kobolds portal painting should be finished and they ought to be well on their way to moving on to their next location. 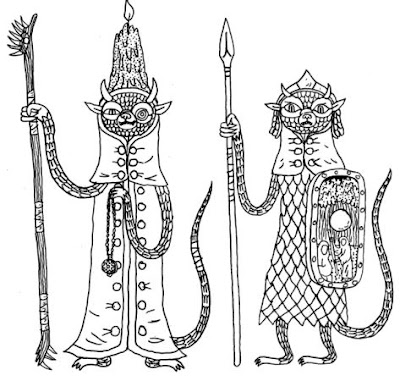 
The cleric set off to say goodbye and arrives into the gallery the kobolds had occupied to find it mostly empty but for the things they intended to leave behind and the portal painting. Voices come from the side-room where the original painting workshop had been and Curator Zosk and another kobold appear. Seeing the cleric, the curator vents agitatedly, the cleric casts comprehend languages and hears about how fey have come out of the masterwork the party just traded to the kobolds and now all the kobolds are stuck dancing.

Guessing it might be more of the same situation they had encountered in the Feywild, the cleric messages the bard and summons them to help. The bard had been dressing for a date, throws a sword-belt over their fancy gown and brings along their date on the way down into the depths of the palace. The pair of dragonblooded nobles turn up in their fancy duds with swords while the cleric is still trying to clarify the agitated kobolds problem. After figuring out that it is not that fey have trapped the junior kobolds deeper in the dungeons of the palace but that they emerged from the masterwork in the realm on the other side of the portal painting, they resolve to venture through paintings one more time.

Curator Zosk hands out paint dabs then vanishes along with the guard. After a moment where the bard cast alter self to become an elf for their edge against mind-control the cleric, the bard and her date step through. This time, instead of the impressionistic or other strange effects, this is clearly another real place but very different. The air is thinner and drier, gravity lighter and the reddish sunlight shines down into this carved chasm. Broad ledges are carved into the rock either side of this wide, winding natural chasm and the party find themselves facing great carved faces on the wall beyond. Previously it was unclear whether the portal painting depicted a realm of dwarves or giants - now it is clear this is a realm of giants, unlike anything they have seen before.

The kobolds beckon the party into passageways carved into the cliff as the sounds of something large coming along the chasm is heard. Everyone ducks around a second corner and the bard peeks out to see a great lion-bodied creature with folded feathery wings and a giant human-like head pacing along the ledge, the claws of its feet clacking on the stone, gems and jewellery clicking together. The party lurks as the creature passes by then follow the kobolds deeper through this maze of passageways. Further on they begin to hear familiar strains of music, recognising the same sounds from their Feywild jaunt to rescue the stray princess. They pause outside the room to take stock then make their move.

Within they see a swirling packed mass of kobolds, dancing roisterously to the tune played by a group of satyrs before the masterwork depicting the Fey glade. In the chaos it is difficult to tell how many satyrs are mixed into the crowd but this becomes secondary to the issue of the cleric becoming bewitched by the music and stepping forward to join the dance. The bard and her date attempt to hold them back but the mighty-thewed cleric drags them both forward. The bard counter-songs into the clerics ear as Curator Zosk and their guard also clamp on - the guard being the only one managing to stall the clerics progress long enough for the bards counter-chant to work.

The cleric snaps out of it but the satyrs have noticed them and recognised the joyless intruders who spoiled their fun and stole their guest before. The tone of the music changes. The bard steps up to counter-chant the bewitching effect while the satyrs switch to a dread tone of music to try and scare them away. A tense and cacophanous moment breaks the satyrs enchantment and the dancing kobolds begin to snap out of it. Curator Zosk steps up to direct their extended family and the satyrs find their welcome has suddenly worn out. The dance turns into a near riot as the furious kobolds pummel the satyrs as they butt and elbow their way back towards the masterwork. The satyrs flee back to the Feywild through the painting and Curator Zosk and the historians step in to calm the crowd and prevent them damaging the painting.

Some sharp queries by Curator Zosk and the Painters on how the satyrs managed to emerge from the painting are made and some junior kobolds are shame-facedly revealed to have ventured within. The party leaves them to their scolding and after some discussions on securing this second dangerous painting - sitting opposite the shrouded 'Ward Against Self' - they make their excuses. The party is guided back out to the portal painting, thanked for their help and handed more paint dabs by Curator Zosk. Stepping back through once more, they turn and find the portal painting has vanished from the wall behind them. The kobolds have moved on, leaving behind the planar artworks they traded to the Lady of the House and the grand portrait of all their deeds with the party at the end of the room.

The cleric excuses themself to get some sleep ahead of their departure the next day leaving the bard to spin the tales behind the sketch of the palace to her date and tell the tales of all their adventures with the kobolds. 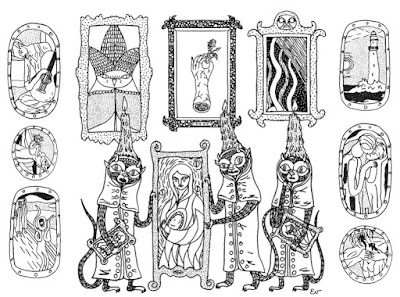 Kobolds and their collection by Evlyn Moreau


All told I got a huge amount of use out of this zine - eight solid sessions where an A or B plot for that session had direct interaction with the kobolds, more if adventuring tied to keeping the kobolds from getting themselves killed in the lower parts of the palace are included. All the players loved the artwork in the zine, as soon as the session ended they were 'we're done, no more spoilers, show us the zine'. The cleric read the whole thing in detail and spotted all the hooks that got spun out into the major plot-lines. The bard may well fold it into their own Candlekeep / Stygian Library campaign.

I liked how this zine is more on the 'spark inspiration' side of things than 'here are a bunch of keyed rooms with a set plot'. This will either suit your campaign style or not, but I think it sat in a great place from being close enough to main-stream that you can easily detour off whatever campaign your are up to and work in the kobolds while still being interesting and inspirational. I think a nice tonal note was hit where the kobolds are competent and cunning enough that them getting by on their own is plausible but they have gigantic dreams and want dangerous things that makes it sensible that they would seek assistance from, say, passing adventurers.

You can find the Kobolds Art Exhibition for yourself on Le Chaudron Chromatique through the 'PDF versions' link under My Zines at the RHS of the blog. We got hours and hours of good use and fun out of it, solid recommendation.
Posted by Xaosseed at 04:01