tl:dr; a great fun, evocative sphaghetti fantasy D&D setting with some neat mechanics to capture the rollicking band of knaves style of play.

I picked up Brancalonia in another of my 'darn I missed this first time round' instances - backing the Empire Whacks Back kickstarter, I got the original books as an add-on. Brancalonia - "sphaghetti fantasy" - is a campaign setting for D&D 5e "based on Italian tradition, folklore, history, landscapes, literature and pop culture" - but more than a setting for the game, this is another mod. The classes and background mesh with a collection of new setting rules (and guidance to pick optional rules within the core set) that aims to deliver the experience of being a band of roistering Knaves and ne'er do wells out for their latest job. 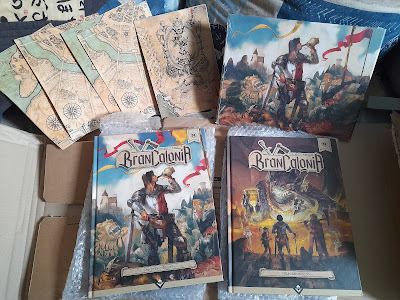 The art throughout is great - the book looks like old paper with wine stains on it, stains explained in a chastising front note. Top marks for beautiful, consistent, evocative art - this is a really pretty book. The layout in general is top notch, a nice, clear, easy read with good boxes and sidebars and tables are where you would expect to find them from their mentions in the text.

Opening the book we get a nice Appendix N, and the intro 'this is a world of heroism and heroes - and you are not one of them. You are the ones who step in when things go wrong, dabblers, swindlers, scoundrels and greedy Knaves.' This is a game about being the scoundrels and chancers at the bottom of the heap, where the stakes are a purse full of coins, a good meal and another few days ahead of the law.

What is really interesting here is that this is an E6 game - you run up to 6th level, then whenever you would advance a level after that, instead you get a feat. It means both the rules, the world and the challenges in it are all tailored to a much tighter range than the usual 1-20 level spread which is something quite refreshing.

So what is all this stuff you get in the book?
Brancalonian Knaves - 36 pages on races and classes
Tavern Fights and Empty SaddleBags - 20 pages of all the new rules
Money and Equipment - 10 pages on gear
Running Brancalonia - 16 pages of GM advice
The Bounty Kingdom - 44 pages of a gazetteer
In Search of Quatrins - 32 pages with seven adventures
New Monsters and Enemies - 25 pages of monsters and NPCs

Breaking that out block by block we start with Brancalonian Knaves - which opens by declaring this setting uses the E6 format - characters rise as normal to 6th level then each time they would level up after that they get a feat instead. Interesting!

We get a half dozen races of Brancalonia - humans, magically capable gifted, half-giant Morgants, wild Sylvans, living-wood Marionettes, and the devil-fled-from-Infernal-service Malebranches. For each character class we get a Brancalonian archetype, there are also setting-tied feats and a bunch of new backgrounds. All together you get a setting specific versions of classes, races and feats which combined with the advice on 'checking fit' for importing from other 5e sources gives your players all they need.

Tavern Fights and Empty SaddleBags gives us the different rule sets, some of which are mentioned in the core rule-books but most of which are new. Here is where the cunning work for the setting is done - first we get a parallel non-lethal combat system in 'brawling' where whacks and slaps can be dealt out to resolve conflict at just the cost of pride and a few personal possessions. With one of the points about 5e being the extra-ordinary damage output characters can put out when they 'nova' this is a great toolset to have to help get the tone of tavern brawls right. Next we have the reputation system, tracked through the bounty on a characters head from their misdeeds. These feed into complications ahead of jobs. Jobs are also significantly seperated from downtime by short-rests being a night and long rests being a week of rollicking. Brancalonia is supposed to be run with a distinct 'job/rollicking' seperation - one where the hard work is done and another where the spoils are consumed for pleasure. Another part of this is the Dive, the homebase for a group of Knaves which they can spend their loot on upgrading with distilleries, canteens and other amenities.

Money and Equipment includes the rules on shoddy equipment which all the potential players I discussed this book with found hilarious and definitely wanted to try - you are penniless rogues, of course your gear is junk. Bits of your armour fall off (and reduce your AC) on bad rolls, your weapons similarly can come apart, your mounts can lame themselves, your magic has undesirable side-effects - all part and parcel of running a third rate outfit. There are Brancalonian items, both new equipment, magical items and momentos to round out the chapter.

Running Brancalonia has lots of advice on getting the tone right and creating adventures. There are useful dive generators, mysterious roads and guidance on prophecies to help a GM generate things for their Knaves to chase after.

The Bounty Kingdom - some brief history (2 pages) then a few pages on each of the 15 regions of the Bounty Kingdom, a few more on the seas around the Kingdom for those of nautical bent and some hints at what lies beyond the Bounty Kingdom. Here we get the detail on each of the regions and their peculiarities which will let you tailor the type of game you want to run appropriately. Want to do some exploring? Spend time in Piccadora. Want to raid some ruins? Try Volturnia. Monster hunting? Ausonia - and so on.

In Search of Quatrins gives us enough to get a campaign rolling - the first job introduces a potential 'boss' then assuming they get it somewhat completed they have a Dive to stay and then the other jobs stem from that. Each adventure is ~ 6 pages, fairly straightforward but enough to cover a nice sessions worth of play. This is good stuff and helps bed in the tone of the setting, demonstrate the kind of play Brancalonia is for and showcase how the setting is different.

New Monsters and Enemies - I liked the monsters a lot, there are great illustrations and the tight level focus of the setting means that all these monsters are pretty useful from the start.

All told you get the tools to run the brawling, rollicking, campaign for scoundrels that the setting portrays. The alternative combat system is a great addition, the classes, backgrounds, spells and feats are all strongly evocative and throughout the fluff and art portray the setting admirably.

I mentioned a few of these elements to my home-game crew as I was reading through it and they were enthusiastic to try this setting in a way I have not seen for other settings I have mentioned to them recently. Brancalonia feels refreshingly different, not so serious but then as 'sphaghetti fantasy' it is not supposed to be. All in all a solid addition to my shelves, I look forward to getting it to the table.

For other reviews see Axian Spice, Hero Engine or No Dice Unrolled
Posted by Xaosseed at 10:06