For the challenge, the dungeon is supposed to be the place where real adventure begins. The prompts reflect a quite specific vision for setting things up but are helpful to get things started, then it runs itself.

For our dungeon, we delve into a Temple of the Boring Beetles - our dwarf analogue on this world. The whole dungeon is carved into the trunk of one of the giant trees. The entrance is carved elaborately, an optical illusion that distracts from the chute within. Going with archetypes for dwarves, this is both a functional place the beetles used and a death-trap for strangers. Their optical-illusion carvings will be a feature.

The guide instructs us to make some rolls to find the number of themes we are dealing with. There was a little discussion and iteration but the themes we finally settled on were:
Theme 1 - the abandoned outer halls (intruders, things that settled in a ruin)
Theme 2 - the last stand of the boring beetle cult (cultists)
Theme 3 - the corrupted sanctum (spiders, undead)

The treasure hoard at the bottom of this is mostly fine crafted wooden objet d'art and the library. The spider-vampire now in residence hoards knowledge, gathered some themselves and then invaded and took over the lower levels to secure the temples library.

Dicing up some numbers of rooms, connections between levels, and alternating with the in-house testing team to place room rapidly blocked out the levels and their rooms. Some thing sprang into focus as we kicked around the themes.
- The place had once been a functional temple complex, the first level was abandoned and has dangerous but non-intelligent creatures that have made their home in this convenient lair.
- The deepest level is where a corrupter has taken over, a spider-vampire with its thralls. They gained their foothold after the original cult fell into dissarray after their primary shrine became corrupt. It remains, a hoard in a room carved with patterns that induces homicidal greed.
- Between these two are the last remnants of the cult, clinging on and trying to reclaim the lowest levels to cleanse its many corruptions.

This all got sketched out like this, zooms and room key to come later. 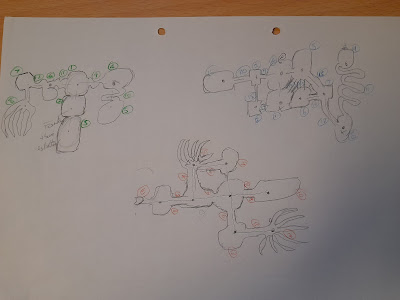 All in all this was also a good set of prompts, blocking out rooms and level connections help create a form with constraints that then informed the rest of the elements.
Posted by Xaosseed at 10:20