tl;dr: players like to be chaotic good, in neutral or lawful settings.

A few recently gathered polls had preferred alignment data, including the survey Mia Gojak did on 5e facebook page. I decided to see if there was any consistency to what alignments people claimed as their favourites. 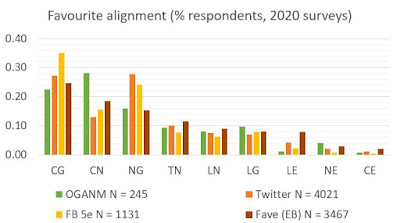 A definite preference for the top right of the standard 9-box alignment can be seend - chaotic good, chaotic neutral and neutral good switching around a little between the surveys but generally, clearly preferred.

A second tier is the top left - the pie slice from true neutral out to lawful neutral and neutral good. Then finally there is a lot less preference for the evil alignments with lawful evil being the least bad of the bunch.

This is interesting given that other systems like DCC or older D&D editions had only lawful, neutral or chaotic as the options - and chaotic was the darkness and horror of dungeons, law was the light of civilization. If we broadly say those options are lawful good, true neutral and chaotic evil then the best option people could get to was apparently neutral - and according to these poll results that does not cover most peoples top 3 choices.

The Elderbrain survey data asks two other questions on alignment - what do you like for the alignment of the setting and what is your preference for NPCs. I crunched those numbers too and compare them all here on a spider plot to allow the difference to be clearly visible. 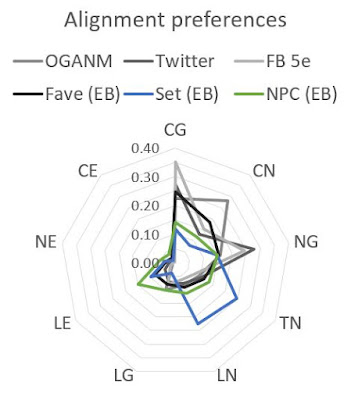 For the preferred setting alignment (blue) there is a definite swing away from what people like to play themselves - a lawful or true neutral backdrop for the chaotic characters. The range of preferred NPC alignments (green) is much more even, more or less open to any of them except for neutral and chaotic evil. Looks like if you are going to have an evil NPC, make them lawful - bad but with a code.
Posted by Xaosseed at 23:31