In Corpathium to feed Nanowrimo

I wrote a draft novel for Nanowrimo this year and short circuited a lot of the world-building by setting it up the road from where my current campaign is set.

This had one or two neat pieces to it because it was easy to have the characters rattle on about their concerns and what was happening in the background because all that was already in play, I knew what was going on.

What was super useful, that I did not expect, was setting out the layout of the city where a lot of the action took place was greatly simplified by using some of the quick and easy world-building tools that are sloshing around in the OSR scene at the moment. In particular, I pulled up the glorious In Corpathium city generator to quickly block out where things were and what was happening in the various places.


This was a hybrid approach to just the pure-line dice dropping - I knew there were some features already in place - the city walls, a large central feature, a basilica off to one side of the city - but within the walls, around the central feature - duck egg.

Things I knew before hand:
- this was an ancient dwarven citadel that was long ago conquered by a dragon cult
- the city lies in a valley reasonably high up a mountain range
- all this region fell within the domain of a lizardman empire, for whom the dragon and her cultist were the local feudal lord
- the core of the city was built around The Staircase, an old artifact of the lizard empire to allow travel between this and the nearby planets as they sought to dwell closer to the life-giving solar queen

So; instead of having to try and figure things out and come up with detailed stuff that made sense, I chucked down some dice and took the readings from In Corpathium. My original sheet is now misplaced somewhere but I have the end results - which neighborhoods were wealthy and not, which had what purpose. 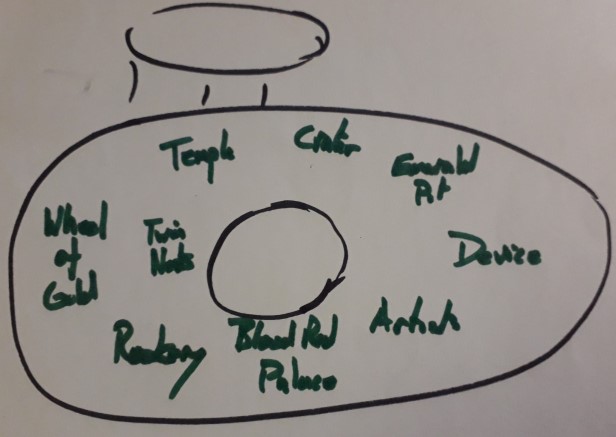 From these raw hooks, I started to work out the city as true in the setting
Wheel of Gold - as a wealthy merchant district, fine, can keep that more or less as it is - this is where the lizard empire clan lords live.
Temple district - perfectly place; landing between the great central device and the basilica of the ruling dragon cult - obviously where everyone not sufficiently glorious to stay in the sacred basilica resides
Crater district - suddenly a chunk of my plot reveals itself; this was the impact crater of a star metal meteorite that came at a low angle and buried itself in this mountainside long ago - this was why the dwarves set up here in the first place long ago
Emerald pit - the impact from the meteorite created cenote like collapsed caverns along its impact path; this whole district is riddled with sink holes and depths; surprisingly green because it remains unstable and untouched
The device - conceptually reworked; this is a part of the city where the effects of the Staircase have bled over; the original styles have become warped; this district is a melange of the architectural styles of a dozen worlds. These buildings are strange but dwelt in.
Artists quarter - where the creatives of multiple worlds come and mix and share inspiration; became a world-walker entrepot - trade, inns, artists, where anyone in the city goes for a good time
Blood Red Palace - reworked as the bastion of an off-world variant of the solar-queens cult; from a hotter planet, the Devouring Sun - reflecting her aspect as life taker, desiccator, the unrelenting glare. Strange plants from a harsher world planted among stone mosaics.
The Rookery - keep as is; crammed into the dankest corner of the city; overshadowed by the lizard nobles up the hill and the harsh sun cultists next door; this is where the poorest and most desperate reside, buildings piled atop buildings, roofs becoming floors and over again.
Twin Nests - more spindly, twisted buildings, another zone warped by bleed-over from the Staircase - here where the strange things that have come through but are not welcome elsewhere in the city dwell.

Just so; the path of the books characters through the city becomes clear; who and what will be encountered and when; where to find the Wayfarers guild of world-walkers? Of course in the Artists quarter. How to access the ancient citadel beneath when it is held by hostile foes? By descending into the deeps of the emerald pits; following the old mining access routes now long forgotten since the star-metal asteroid was played out.

The raw hooks from In Corpathium lock together with the features of the world and the city springs to life.
Posted by Xaosseed at 10:10