For those of you working with cities; d4 Caltrops did this is a cool approach to quickly setting up city crawls with voronoi-tesselations. It took me a little button-mashing with my various browsers to get what I wanted so this is my how-to walk through to complement the original article.

Driving factor - I need detail on a city in my game, one that has suddenly skidded into focus. I have found it is good to do this before the party actually hits the place so you can get the 'famous for' right when they ask around about the place before they go. In my experience when randomly generating cities you will often find some really cool feature of that city that would be a famous custom or landmark - canals of Venice or fine cuisine of Paris type of thing - and it would seem reasonable for NPCs and investigation checks to mention this. 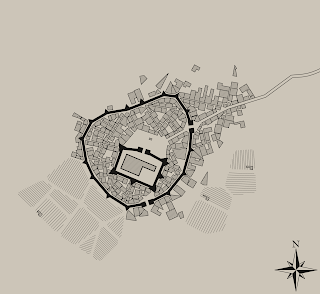 II. Tweeted this map (in place of using metropologeny) then as guided right click on an image and “Open in a New Tab” to obtain a URL to use in the next step. This would not work in Firefox or Chrome for me, only Edge.
III. Follow through on the directions from d4 Caltrops. I did the method by adding points individually - starting with the citadel then building around it to get districts that matched the map
IV. Save out a map with districts marked, number those districts. I just did this in Powerpoint since thats where I keep my graphical things. 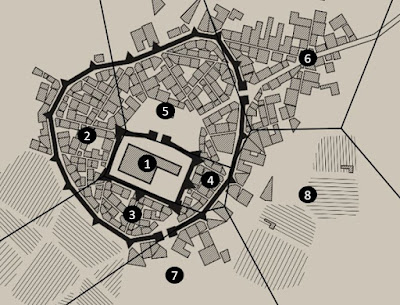 V. I used In Corpathiums 'additional undefined boroughs' to get rich/middling/poor for each district and some name hints. Most of these I reworked to fit to the in-game lore.
VI. Returning to the original post I diced up some professions from d4 Caltrops NPC list to get ideas for primary activities. The final district list is:
1. Citadel – local lairds
2. Forgefires – poor – religious hermits, illuminators
3. Irongate – rich - traders
4. Shivers – poor – herbalists, criminals
5. Festhall – middling – craftsfolk, travellers, temples
6. Footfall – poor – butchers, potters
7. Highhall – middling – distillers, men-at-arms
8. The Abbey – middling – bakers, religious

So from all this we have some critical factors - the primary activities of this place are distilling, trading and there is a strong religious presence with both the Abbey outside the walls and hermits and illuminators within. We have ended up with bakers, distillers and herbalists which implies grain crops as the local staples and a focus on the grown or gathered that also fits with our potters.

This gets layered onto the known in-world lore as this being the seat of a local old ruling family, a fortress founded with an eye against fire giants in the nearby mountains and key stop on the route between the frontiers of the realm and the heartlands to the south. There will be a strong cold weather and fortified flavour to the place.

Good enough to work with - next piece of detail work is to drop in the few locations that were mentioned by others, name the key streets and we should be ready to go. Definitely quicker than running the full In Corpathium method, less fun but good enough to get the job done. A lot of the time lost this time around was on figuring out how to get the maps and the tesselation pages to talk to one another, with that resolved the next ones will be quicker.

An alternative method is this City Map System from Anxiety Wizard.
Posted by Xaosseed at 10:19